You are here: Home / Blog / Knitting / Sock of the Month Club

It was also expensive. In a “worth every penny” kind of way, but still. I’ve decided this year, to do my own Sock of the Month Club. 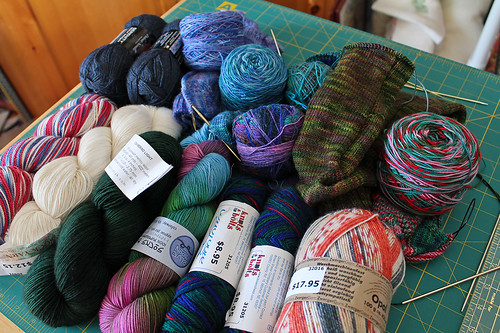 As you can see, some of what I’m planning to work on has already been started, (2 are leftover from last year’s sock club…), it felt arbitrary to try to impose “rules” on myself like “it has to be new or it doesn’t count” — the idea is to make things, not make myself crazy. Most of the socks I’ve made have been for myself, because frankly, I’ve not been willing to spend that much time and money on socks for other people’s feet, however, my feet are big and socks that fit take awhile, so I’m looking at making some of these for other people. Maybe.

So, that’s the plan. I’m willing to be flexible with the plan, and if someone wanted to spend $255 on a 2012 Sock Club membership for me, I wouldn’t turn it down. Maybe I can find that much change in the couch? No?