You are here: Home / Blog / Other / Dressing up

The boys have to dress up on the days they have basketball games — nice pants (no jeans!), and a shirt with buttons.

Some of the 8th graders conned the coach before the first game “I don’t have any nice pants,” they cried. So he allowed that if they wore nice jeans, that would be OK.

At that game, a few parents were discussing this, and were more than a little annoyed, because we’d all gone out and bought new clothes for our players. As we talked, it occurred to one of us that at least one of the players that complained is in band.

Band members are REQUIRED to wear black pants at concerts.

At the next concert (which just happened to be within a week or two), we were all very interested to notice what these players were wearing. Sure enough: black pants and a dress shirt were spotted on several of the complainers.

The topic came up again at a practice and the cry was the same “We don’t have any nice clothes!”

And Mark looked one of them in the eye and said “I sat next to you not 2 nights ago, and you were wearing black pants and a dress shirt.”

The tune changed “But I didn’t know we could wear black pants. I thought you said it had to be khakis.”

Another young man said “I don’t have any nice clothes either.”

Mark looked him in the eye and asked “What did you wear at the concert the other night???”

His answer was “I burned those black pants.”

As I mentioned above, some of us went out and bought some new pants and shirts for our children, since they were woefully lacking in the nice clothes department. Every time they go to get dressed, though, my boys keep trying to pair BLUE pants with shirts that have BLACK as a predominate color.

They also wear white socks with their black pants and black shoes.

I kept telling them that particular combo was not acceptable, but they kept trying, in part because one of their pairs of black pants was buried in a closet under a metric ton of clothes they no longer wear.

This morning, as I was getting dressed in one of my brand-new sweaters, I really wanted to wear a skirt, and the skirts I have are black or grey.

The sweater reads primarily as what I would call turquoise, but if you get up close to the ribbing, you can see that it is mixed with, you guessed it, Navy BLUE.

I decided I could not, in good conscience, wear it with a black skirt, and stuck on my navy blue dress pants. 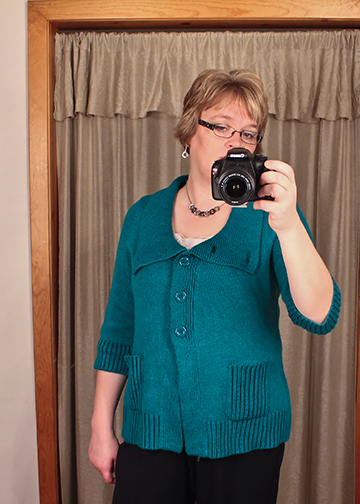 I thought I was pretty cute, and I didn’t have any guilt about pairing black with blue.

I’m still waiting for my sister to notice how blonde I am, though.