You are here: Home / Blog / Other / Adventures in Homeownership, part 569

Last weekend, Mark went out for one last pass with the mower before the snow comes, mostly to chop up the leaves. He came in and told me that there was a “swampy” spot out in the northeast corner. People were called, consultations were held, and the conclusion reached was that a pipe (the incoming water?) was leaking, and probably had been for some time.

Lucky for us, the plumbers he called could come Tuesday morning to dig up the yard and fix it. At some point Monday night, a backhoe was delivered to our yard: 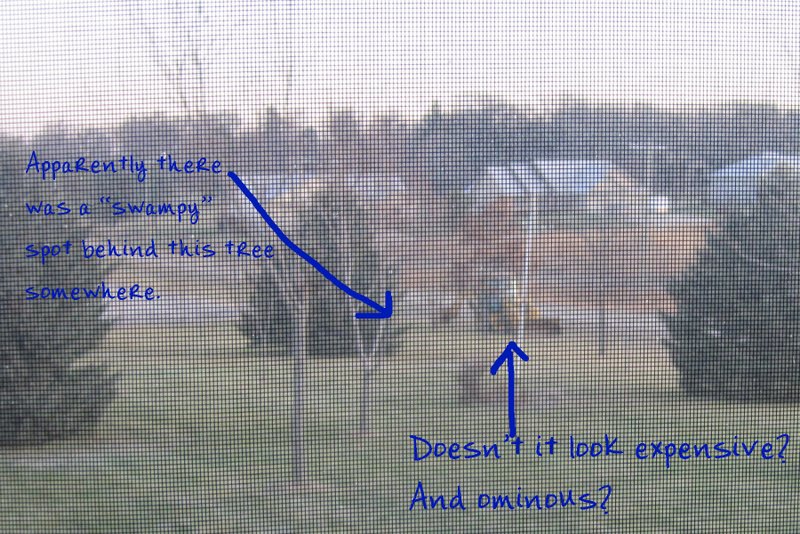 When I saw it out there this morning, all I could think was “Damn, that looks expensive.” As in: Suzanne’s Christmas presents this year consist of fun things like Having-Your-Yard-Dug-Up and Getting-Your-Water-Fixed. That kind of expensive.

The people who built our house and lived in it for 14 years now live across the road from us, and the wife often subs at school. This morning, when she came to my office to fill out paperwork, I asked if she had seen the backhoe — she said she was wondering what was going on.

After I told her the situation, she said “I’m glad I don’t live there.”

When the boys and I arrived home from school this afternoon, one of them had to use the facilities right away. I was looking out the window at the piles of dirt the backhoe had left, when he came running in and said “I flushed and there was a really loud bang, and then there was another smaller bang.”

Ah. Air in the pipes. I turned on a faucet and it sputtered at me. I decided I’d better call and find out what Mark knew. The ultimate verdict was a cracked coupling. Repairs were made, and very little of the yard had actually gotten dug up. The plumber had turned on the outside faucet to run some water, but there’d likely be dirt in the water for a bit, so I should turn on the faucets and let them run for a bit.

Remember that. I was doing what he told me to do.

I turn on faucets and flush toilets and then discover that the boys’ toilet is not flushing. Again. So I start working on that…and realize that it’s going to take more energy than I have at the moment, so I go back to the faucets. The ones I check are running clear, so I wander back around the house to turn them off…to discover…

My bathroom sink wasn’t draining, and hadn’t been for some time. There was water all over the floor and it was starting to ooze into my fabric closet.

I might have said some bad words at that point. Thankfully, a boy heard my swearing and came rushing in to see what was wrong: I sent him for towels. I was having such a blast crawling around mopping up dirty water, in my work clothes, and contemplating the toilet I still had to unclog (which I did, thankyouverymuch), and wondering if I had any drain cleaner to use.

I only mention the drain cleaner, because I did have some, and nearly killed the cat with it. I poured it in the sink, and let it sit, as you do, when you follow the instructions on the bottle.

I was at my desk when I could hear slurpy sounds: the cat was drinking. Oh s@#$%. I could just picture the cat in the sink, licking up the drain cleaner.

He’s smarter than that, though: I found Miles perched on the toilet, drinking some of the nice dirty water. Yum.