Like a child, the cat seems to be more interested in the box, than in the contents.  (Not that the contents of this particular box had anything to do with the cat.  We’ve been just fascinated by his…well, fascination with the box.) 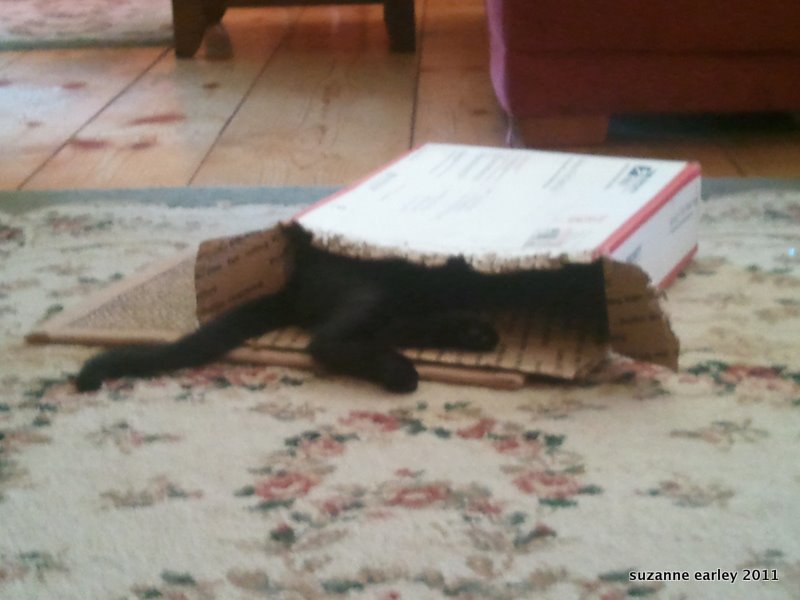 When I took the picture, he was asleep. I looked at him before supper, and his wide eyes were peering out at me, as he waited to pounce on a victim. I’m not sure how stealthy he thought he was going to be, since half of him was sticking out of the box.  I took this about 20 minutes later, when we were close to finishing supper, I hadn’t realized that he we still in the box.

It’s amazing how much he’s grown and is changing into a cat already — when he first came to live with us, he was a ball of floof — his hair stuck out straight from his body.  All of a sudden this week I’m noticing that he is very sleek and shiny.  It probably didn’t just happen, but it’s like your children, one day they are adorable toddlers, and because the change is so gradual, you don’t realize they’ve morphed into gawky pre-teens.

We’ve been out at the family farm a bunch this week, helping to clean up storm damage after the crazy wind storm that came through early Monday morning (The storm was a derecho, which means straight line winds, no tornadoes.  Here in our county, top wind speed was estimated to be 100MPH.) At our house here in town, we had some trees damaged, plus a tiny section of our roof was damaged.  At the farm, dozens of trees are down or need attention, plus one of the barns was destroyed.  It had some equipment in it, which they still haven’t completely recovered, but nothing major.  The crop damage:  Mark said some of the corn was standing back up.  Some of it will never come back, but it’s too soon to know anything about that.

We were pretty lucky, though, as there are other farmers in the area that have lost all of their outbuildings and are looking at all of their equipment being damaged.

At one point on Monday, as I was taking a short break from picking up sticks and raking (dudes, I am so out of shape…huff, puff, huff, puff…), I saw a streak of a black kitty running from one place to another.  It was one of Miles’s siblings or cousins…I mentioned the kitty to Mark and he said to Miles (yes, we talk to our animals), “Those barn cats would be amazed to see you, Miles, all spoiled and lazy.”

I jumped to Miles’s defense “He’s not lazy!”

I gotta give him that one, I guess.