You are here: Home / Blog / Knitting / Two socks at a time

Some people are clever and can work on two socks at a time on a single circular needle, and wind up with a pair of finished socks.  I have tried two-at-a-time, and it just doesn’t suit me, I’d rather concentrate on one sock, get it done, and then do the other.  So far I have avoided 2nd sock syndrome (well, not entirely, I did let one sock linger for a year, and I’ve got another lingering, but that’s more avoidance, because I realized the first sock was too big, and now I don’t know what to do…thinking about ripping out the first one…)…

Right now, though, I’m actually making two socks at a time.  Sort of.

First up is the Mindless Baseball Sock: 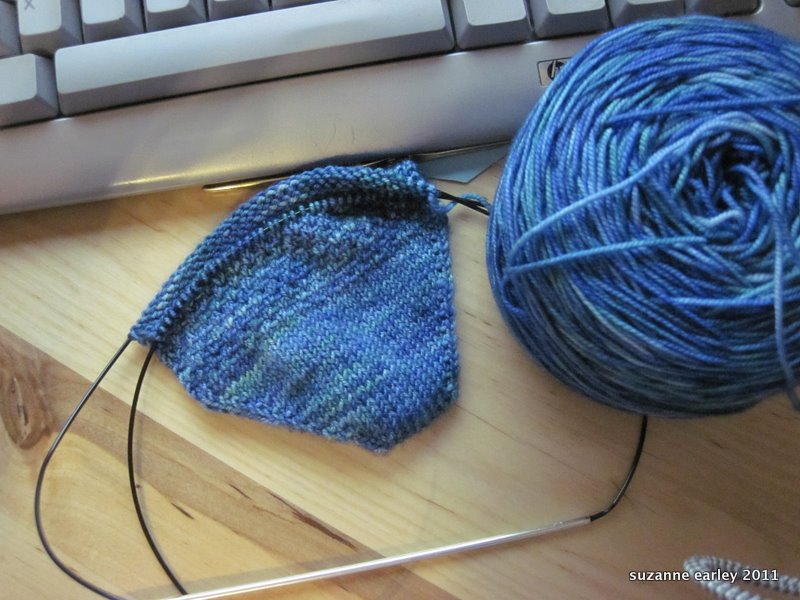 I started it on the way to yesterday’s baseball game, worked on it AT the game, and then continued on it while I sat in the car and waited for Mark and the boys to look at tractors.  The yarn is super yummy:  Ella Rae Lace Merino that Mom got for me shortly before she left on her trip.  It’s really soft, and the color is just lovely.  I decided to do something simple with it, and am just doing a plain vanilla toe-up sock, using a linen stitch on the top of the foot, and then I’ll continue that on the leg.  It’s just enough of a step above stockinette to keep my interest, but mindless enough that I can do it while sitting in bleachers watching baseball games.

But that means I’m saving it for baseball games, and need something for home knitting, don’t you know? 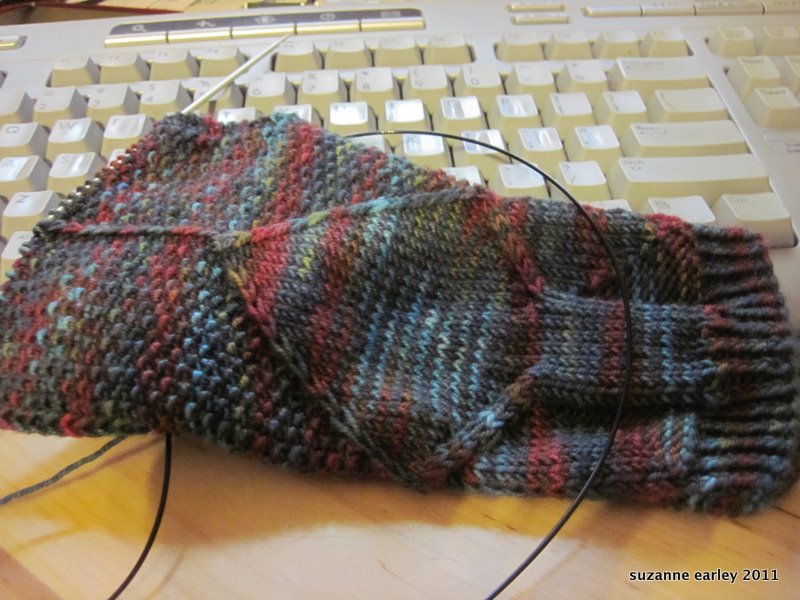 And that’s where this sock comes in at the moment.  The picture doesn’t do the yarn justice, not by a long shot.  The pattern is not hard, but the front and back of the leg have separate charts, and there’s a 3rd chart for the top of the foot.  The yarn is the Blue Moon Fiber Arts Rockin’ Sock Club May shipment, it’s called Maya, and it is 10 times more gorgeous than this badly lit picture would suggest.  The pattern is also part of the club, it’s called Transition Point by Star Athena.  Part of the challenge I made to myself was to knit each kit using one of the club patterns.  Of the 6 patterns I’ve gotten so far, only one has been a pattern that I will never ever make, and another is unlikely, but the rest have been or are something I would do.  I might not have ever chosen them on my own, but I’m enjoying the challenge.  And this particular sock is just flying off the needles, which surprises me since the thickness of the printed pattern made it look really complicated.

Young Miles had a trip to the vet today, which he did NOT enjoy.  He’s been pretty sleepy and subdued today, and I can’t say that I blame him.  All that poking and prodding would make me quite crabby as well!