You are here: Home / Blog / Family / Reboot the blog

When I don’t post to my blog for something like a month, it’s like I went somewhere and now I’m back, only I didn’t actually go anywhere.  Or do anything interesting.

I did compose a blog post or two in my head, but none of them made it any further than my brain.

I’m not even sure why I’m posting today, other than the fact that it’s the first of June, and the first of a month seems like a good day to start over.  Or again.  Or whatever.

Oh, I did actually do something interesting this month:  I allowed a kitten to come live with us. 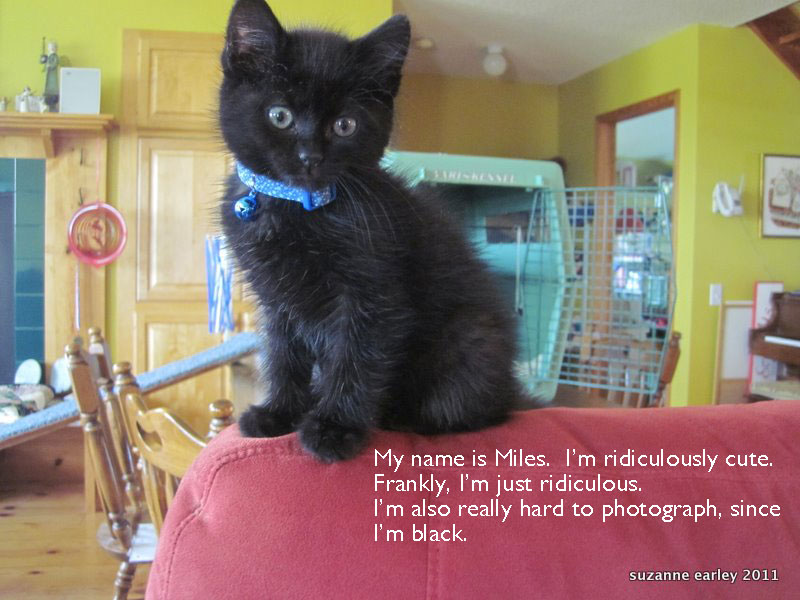 The boys stole him from the farm.  It wasn’t ever entirely clear how many cats and kittens were out there, so it’s not like anyone knows he’s even missing from the farm.

He’s named after Miles Vorkosigan, a character from my favorite author and book series.  The boys wanted Felix, but decided they could live with Miles.  I refused to even consider Felix, so they didn’t have much of a choice.

Everyone, myself included, is surprised that I (a) have a cat and (b) enjoy having a cat.  As I’ve told several people, it’s not so much that I don’t like cats, as it is that I’ve never been all that crazy about other people’s cats.  This ridiculous little guy loves ME best, so…I’m pretty happy.  Plus, the boys are in charge of the litter, so I don’t have to deal with it if I choose not to.

The dogs were dubious at first.  Miles would really like to play with Katie, but she’s completely uninterested and snarls at him and he just skitters away.  Cocoa…well…the very first thing Cocoa did was try to eat him, and she managed to give him a notch on his ear that he’ll have forever…but now…she just lays there while Miles plays with her tail and she lets him gnaw on her face.  He’s growing like a weed, but he’s still just over 2 pounds, which makes her entire head bigger and heavier than his body.

And…that was more about the cat than I intended to write.  I’ve been knitting like crazy, and am thisclose to binding off the sweater that I finally got brave enough to try making.

Tomorrow, I’ll write all about the on-going fiasco of moving my Mom to a new house.  (The fiasco is not of her, or even MY making.)