You are here: Home / Blog / Knitting / Not complaining now

The day after I was complaining about the weather, it was even hotter, and we had to be out in the heat for a baseball game.  I was literally dripping.  (I added the “literally” qualifier because you know how sometimes, you’ll complain about dripping with sweat, but you are totally exaggerating?  Yeah. I wasn’t exaggerating…)

And then?  It turned cold and rainy and it’s been cooler ever since.  Frankly, I’ve almost reached for a sweatshirt a couple of times.  We’ve been sleeping with the quilt on and I am NOT complaining.  Not at all.  Of course it won’t last, but this is the kind of weather I can get behind.  Warm enough for short sleeves and capris/shorts most of the time, and if you get cold a light sweater or sweatshirt does the trick.

Just the weather for knitting socks.

Of course, I consider every kind of weather perfect for that, so don’t listen to me. 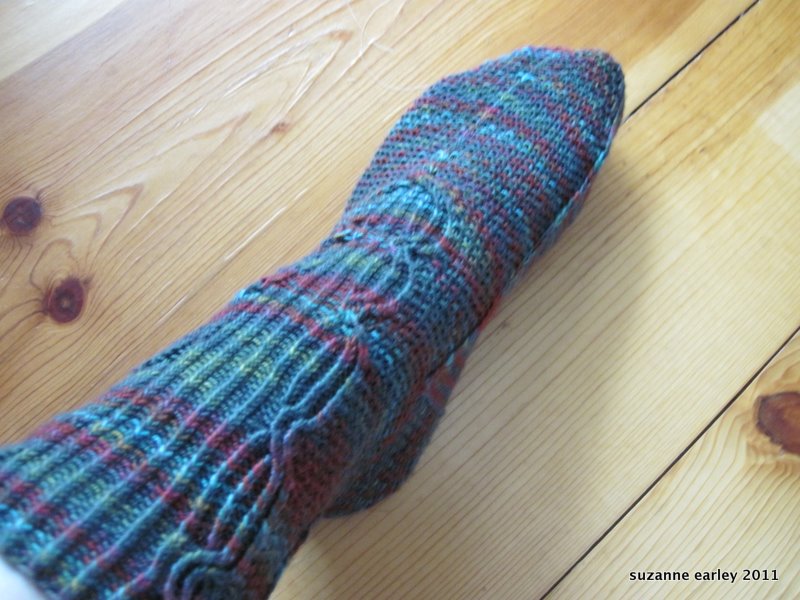 My first sock club sock is finished. I appear to be completely incapable of taking a non-blurry picture lately. I don’t know if it’s the equipment or if it’s me. Both, maybe.

First, I made a mistake in the setup row after the cast-on, and didn’t realize it until about 4 rows in.  And then I couldn’t count and was off by 1 stitch.

And then I could count, had the right number of stitches, and then I recounted them, and decided that I had 5 stitches too many, so I pulled them off, joined it in the round and started knitting and…yup.  I was 5 stitches short.

The moral of the story is…huh.  I’m not sure there is one, other than…remember that I’m meant to be a horrible warning, not an example to be followed.