It is cold here in Iowa, in fact we got snow last night (just a bit) and it was a slushy gross mess.  My poor new car is filthy.  Yuck.  I decided I needed to think about summer and being warm, so Mark and I started talking about our 2011 summer vacation today.  We’ve actually sort of kind of talked about it a couple of times, but never in earnest.  I don’t have anything specific I want to do this summer, so I told him it was up to him to decide, which he think is a trap, or that I’ll get mad if it doesn’t end up being what I actually want to do.    It’s not that I don’t care, I just want to go…California, Colorado, Utah…pick one, I’ll go.

Of course, this got me thinking about our 2010 summer vacation, and I realized that I only ever managed to post detailing 4 days of a 2 week trip. 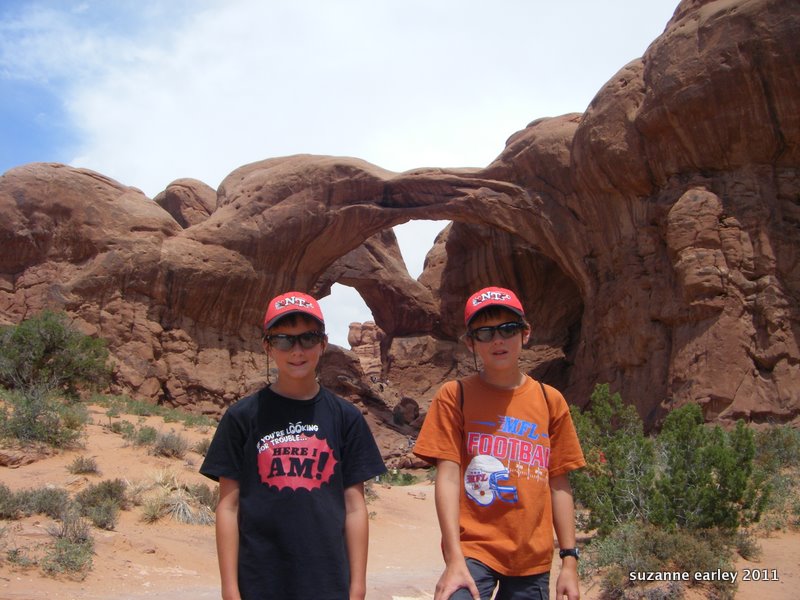 Joe and Will in front of the Double Arch, Arches National Park, July 2010

I’m not sure I’m actually going to end up going back and filling in all of the blanks, but I might dip into the many hundreds of photos we took and share a story or two.  We had such a good time, it might be nice to think about how much fun we did have.

And when I’m so stinking cold all the time, it’s kind of nice to think about being in the desert and being hot.

Also, it occurs to me that depending on what Mark thinks he wants to do this summer, I’m going to have to actually get back on the exercise wagon.