You are here: Home / Blog / Other / Random object

My Ford dealer managed to find a car with just the specs I wanted, and we got to go pick it up today.

Which means I had to clean out the Honda.

Good gravy, I had no idea so much crap was lurking in there.  It was all kinda stuffed away in door pockets and glove compartments, so it’s not like we were tripping over the trash, but I did pull out a plastic cup from Applebee’s with Mountain Dew in it, that Joe had stuck in his door.  The last time the boys were at Applebee’s was at least a month or more ago.

Annoyingly, when I pulled out the maps and stuff from the glove compartment, I managed to pull out the registration, so we had to turn around and go home.  I’m not even sure why or how I flashed on the fact that it was missing.

The most interestingly weird object I found was this: 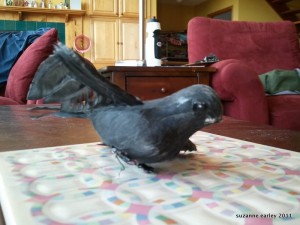 Maybe creepy is a better word.

Where did this black bird come from?  Why was it in my car?  These are the kinds of mysteries that plague me.