You are here: Home / Blog / Other / Teacher and student

(edited January 3, 2015: Just in case you ended up here looking for the online, self-paced version of this class, you need to go here: Feather Boot Camp)

The 4th session of Feather Boot Camp got underway on Monday.  It’s going well — and with the switch to a new shopping cart, my life got about a bazillion times easier.  The switch automates a huge chunk of what I was doing before, and while there have been a few glitches, and there is still room for me to screw things up, ultimately, this has been about 1000% less stressful than previous class launches.

The first week of class is typically pretty quiet, but so far so good.

I’m teaching myself a bunch of new stuff lately, too.  Well, not new stuff, just trying to be a little more official about some things:  I fake my way through a lot of the website stuff I have gotten myself in to.  I’m not afraid of software and of figuring things out, but I have been painfully aware that I was only scratching the surface of the technologies that I have been using.  So, I’m working on officially learning things like HTML/CSS/PHP/ and a bazillion more acronyms plus all of the programs that web designers use to do their jobs.  It has meant getting reinterested in using Photoshop, and the other day I saw that Angela was taking a class from my favorite scrapbooking teacher, Jessica Sprague.  Turns out the class is the next step in her progression of digital scrapbooking classes, and on a whim I signed up for it.  She assumes a lot with this class, that you can figure out how to do some things on your own, so I kept having to stop and drag things out of the recesses of my brain.

This is what I did this morning, using photos of the boys from our Christmas time photo shoot: 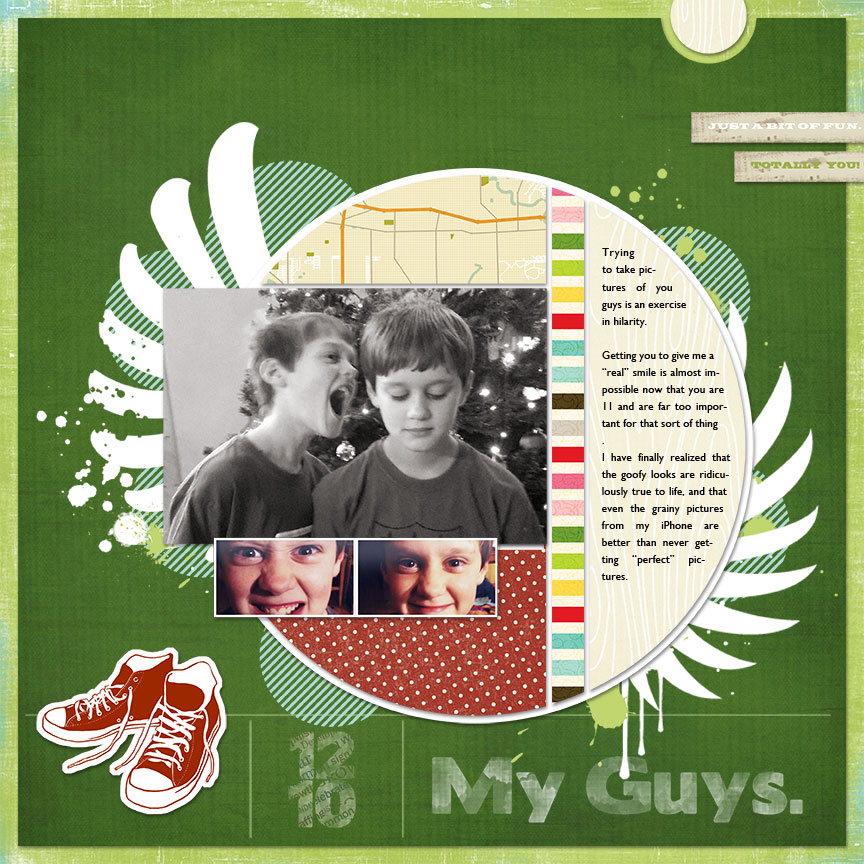 The papers and elements were all provided in class, and I pretty much followed her recipe, but there were several times that made me say out loud “THAT IS SO COOL,” so hopefully I can remember them again when I need them.  It’s not so much that I want to spend a lot of time digi-scrapping, but I thought that things I can learn from her will be useful for the web design stuff that I am learning in other ways.

One cool thing is the stripe generator — http://www.stripegenerator.com — used to make the stripes for the circles in the background.  I like me some stripes.  And polka dots.

This also serves as warning that I will probably occasionally babble about web design/development kinds of things here.  I’ll try to keep the technobabble to a minimum.