You are here: Home / Blog / Other / Must make with the stripes 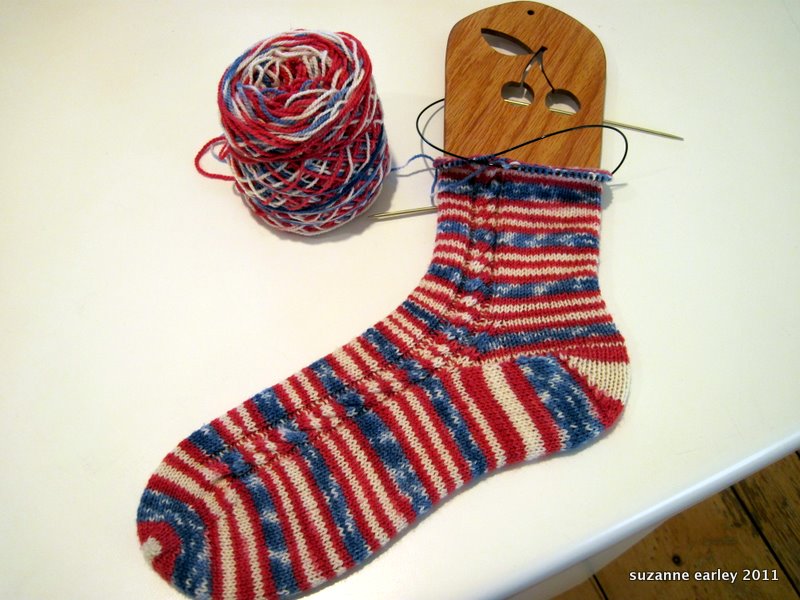 Two things of note here:  the awesome sock blocker that Mom gave me for Christmas (it has cherries!) and the yarn.  You’d think after the first repeat of stripes it wouldn’t be so thrilling to see the stripes appear, like freaking MAGIC, but I’m obsessed.  I need to MAKE MORE stripes.  Because the stripes are AMAZING.

I’ve had this yarn for awhile, and even got part of a foot done awhile back, but wasn’t pleased with how it was going.  And the yarn is expensive enough (and I love it SO much), I wanted to be really sure about the sock I made from it.  Many people might just make a plain vanilla sock out of a self-striping yarn, but to counteract the fact that I have the attention span of a gnat sometimes,  I needed it to have something with a little bit of pattern-y interest, thus the cables (there’s is a matching one on the other side).  The pattern has a different heel architecture than I’ve encountered before:  instead of increasing along the sole for the gusset, you actually knit a flat flap on the BOTTOM of the heel.  It looks really nice (no holes!) and seems to fit pretty well.

And now, I have to go take the boys to school (yippee!  after 3 snow days I’m happy to get rid of them!) and then I might have to make another stripe or 4.