Last night we volunteered at the movie theater — we didn’t know what to expect for attendance, and hoped it would be quiet.  Friday night they had about 55 people, which didn’t sound too bad.

The final count that I heard was 141.

We were 3 people away from being sold out.

Luckily the volunteers get to put seat savers on their seats before anyone else shows up, so we had a row of empty seats waiting for us when we finally finished serving pop and popcorn and candy to the other 137 people that showed up.  The concession prices had all gone up 25-50 cents effective the night before — I was waiting for complaints, but didn’t hear any.

The movie?  Tangled.  I liked it, but then I’m a sucker for that kind of thing.  The boys didn’t seem overwhelmingly thrilled, but they didn’t complain.  Their movie interests are more in the “Exploding Things” category than in the “Disney Princess” category, these days.

I feel like I have spent my entire day quilting, but all I have to show for it is that I finished the black stitch in the ditch, and started something a little more interesting.

OK fine.  You twisted my arm.  I’ll show you another sneak peek: 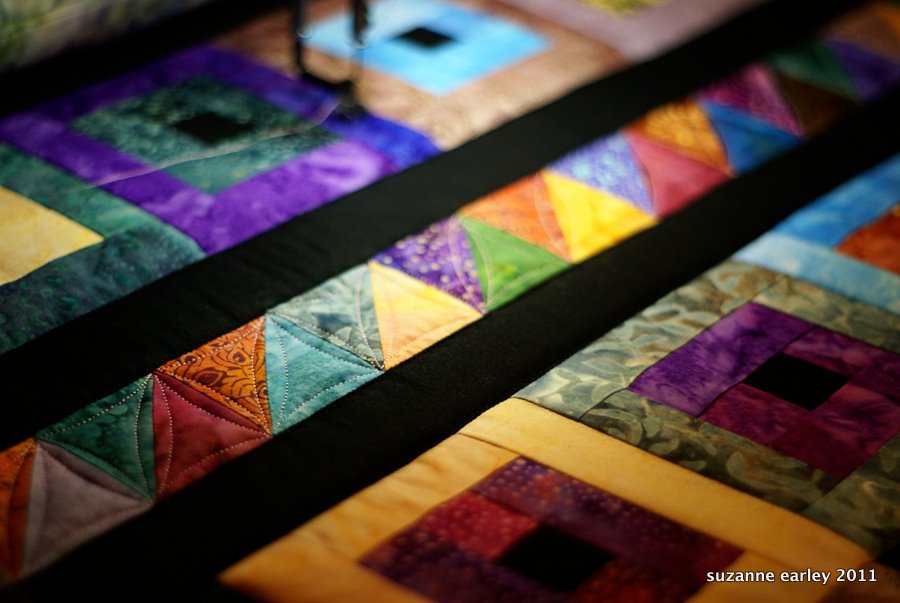 I have to admit that continuous curve is not much more interesting than stitch in the ditch, though.

It’s funny:  I used to be perfectly happy with my freehand continuous curve.  I have tried using the various tools and templates, but have never had much luck, and have always gone back to freehand.

Now that I have an IQ, though?  It does take time to set up the pattern to stitch out, but it is so worth it.  I probably won’t ever do freehand continuous curve again…

Even though it feels like I’ve been quilting all day, I really haven’t.  I’m not really sure what I’ve been doing — I hate that feeling of time being sucked away by the Internet.  I didn’t do a very good job about being deliberate with how I spent my time today, but I figure it’s still vacation, so tomorrow I’ll really get going.