You are here: Home / Blog / Quilting / Welcome to my sweat shop

I have been so productive, that I have hesitated to speak about the productivity, lest I jinx it.

I am taking a break from the sewing marathon I’ve been immersed in for the last 2 days to share a few pics of what I’ve accomplished.  Last week, I made this fleece throw for one of my nieces. 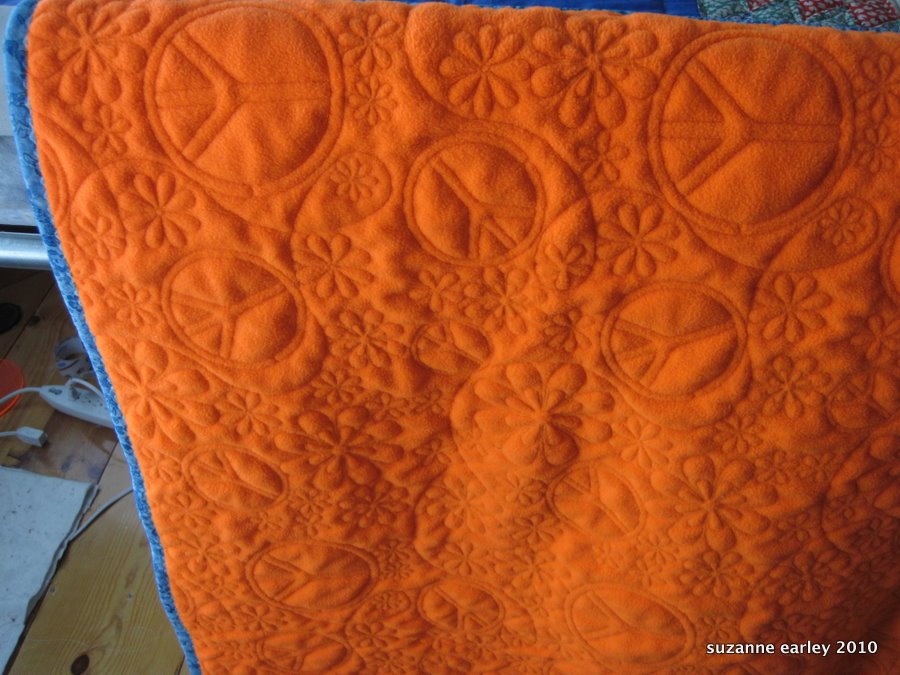 Orange is her favorite color, and this is the leftover fleece from those hats I made at the beginning of the month.  I used the orange fleece, a blue cotton for the “top” and a wool batting, making for a very snuggly lap-sized blanket.

I’ve already documented the Lone Star Quilt that I got quilted, plus I quilted this one: 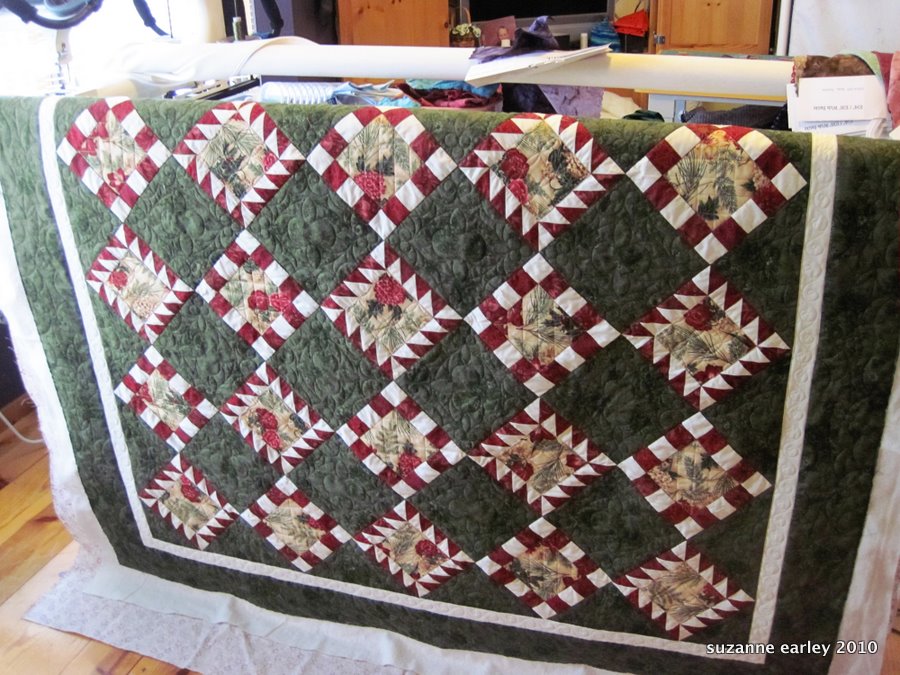 The pattern is Peppermint Swirls by Fig Tree Quilts.  The pictures are terrible:  we haven’t seen the sun in DAYS, and this one is hard to photograph in this nasty light. 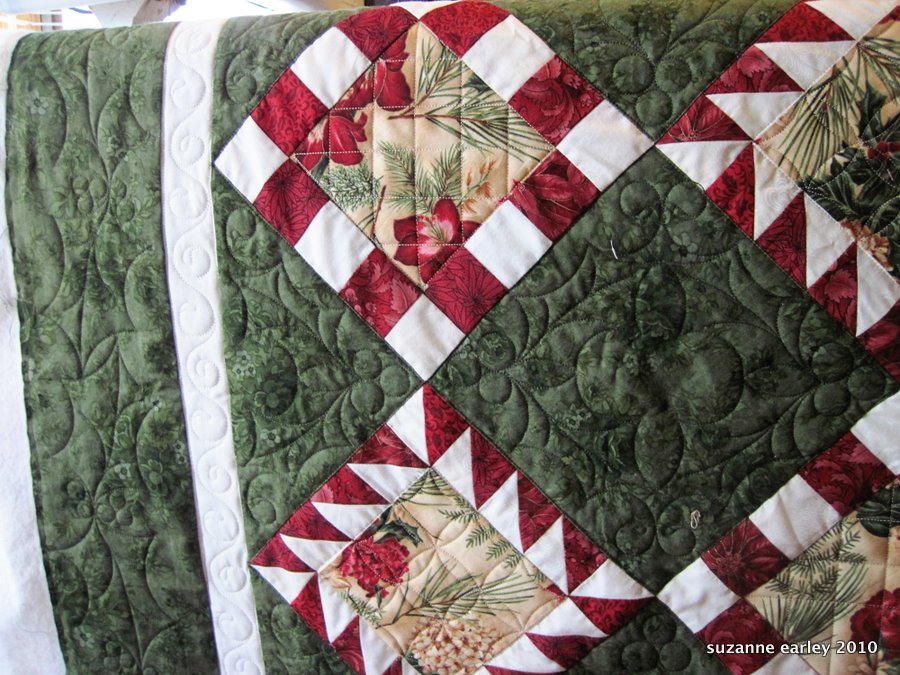 The blocks and outer border designs are by Donna Kleinke and are called Winterberry Holly (I think?)  I purchased them from Digitech Designs.  They stitched out beautifully!  I did the cream border and the green and cream stitch in the ditch freehand.  The stitch in the ditch around the cross hatching, as well as the cross hatching itself, and the orange peel in the print fabric were done on the IQ.

After quilting that wonky Lone Star, it such a pleasure to quilt a nice flat quilt.

I have also finished the binding on a grand total of FOUR quilts.  One is packed and ready to be mailed to its new owner, one has been claimed by my husband, and the other two are waiting for a home, they’ll probably be QOVs. 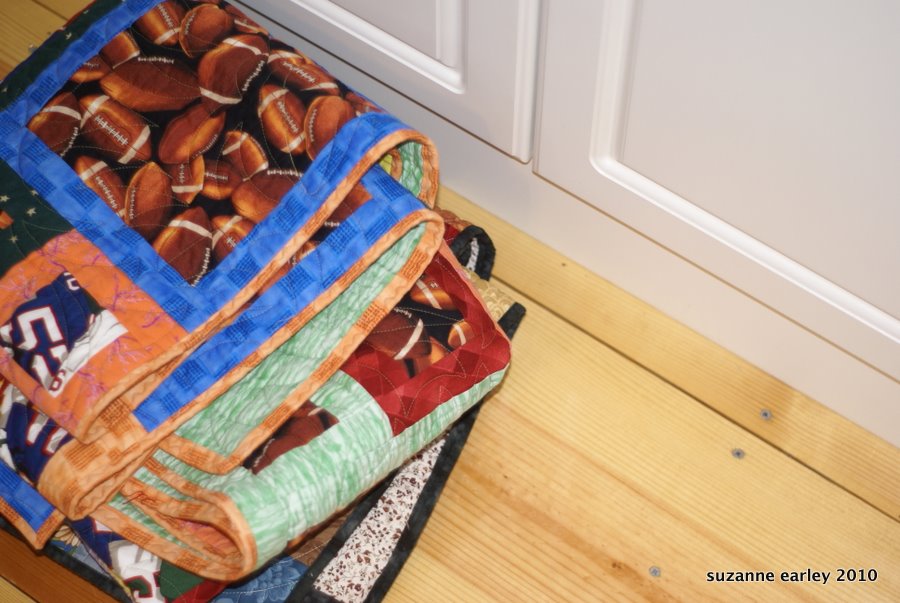 All were shop samples that had been quilted but never bound.  One of the quilts has been sitting around waiting for me to hand finish the binding.  I picked it up two days ago and thought, gee, a machine binding would look a lot better than the mythical hand binding and 30 minutes later:  done.  The other 3?  That’s a weird story:  some months ago I went on a finishing spree and had sewn the binding to the front, but I had never sewn the ends together, so they were sitting in a pile waiting for…something…the binding fairy, maybe?

I knocked those out the other day as well, although I was texting with my sister while I was working on them and managed to cut one of the bindings WRONG and had to piece in another section.

In knitting news, I finished a scarf I was making for myself, but it needs to be blocked, so I’m going to do that before taking any pictures of it.

ANd finally (phew!) I started piecing a new quilt.  I am so beyond thrilled with how it is turning out, I can’t wait to show it off, but I’m only going to give you a sneak peek of a corner: 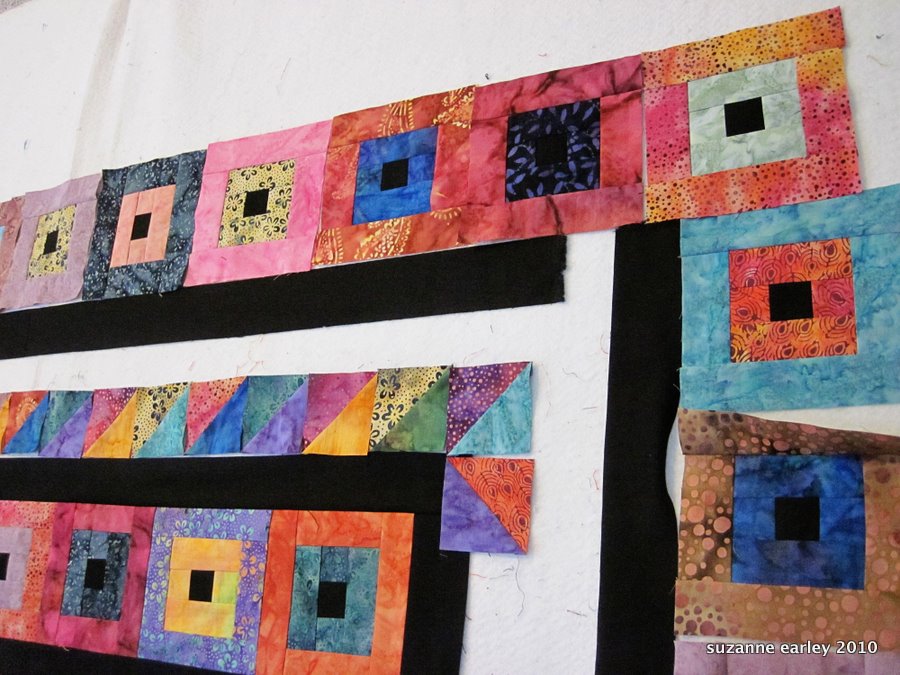 I’d better get back to it — it’s a good thing we don’t have any big New Year’s Eve party plans:  it’s foggy, foggy, foggy and has been raining (the freezing kind of rain) and slick and gross.

I hope that wherever you are, you are warm and safe and enjoying a celebration as we head towards a new year.  2011 had better be great, that’s all I’m saying…