You are here: Home / Blog / Other / This silly dog 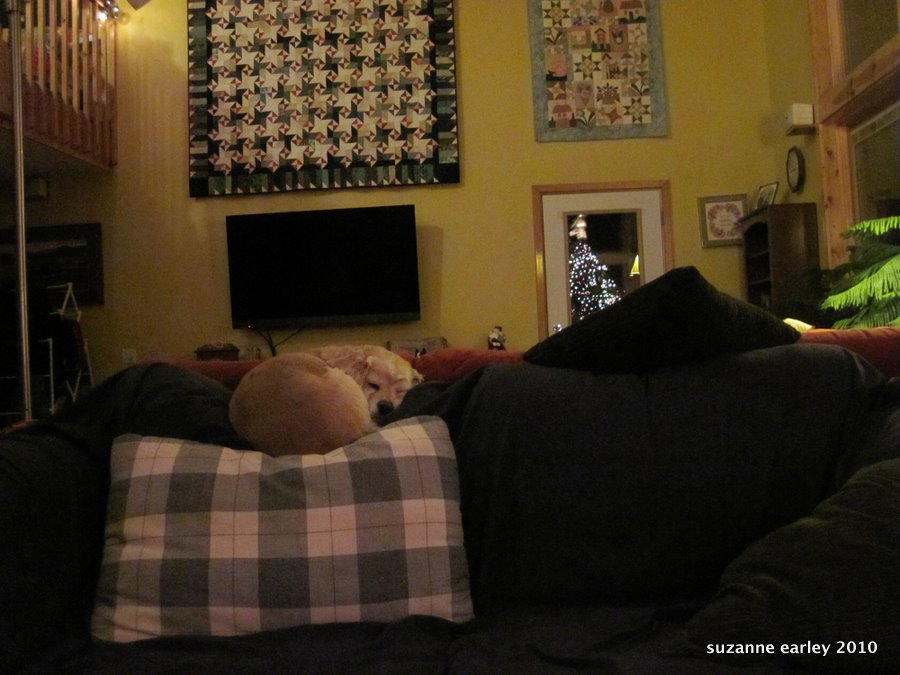 What a life this dog leads.  This is her spot — I think she started climbing up on the back of the couch to escape Toby, our cocker English Springer Spaniel**.  It got to be a habit, and now that couch cushion bears a permanent Katie-shaped indentation. What’s really pathetic is that if I went back through our photo files, I would find MANY pictures of her in some variation of this pose.  I decided it was OK to post a new one because it’s Christmas related.  (See the Christmas tree reflection in the background?  That’s what makes it Christmas related.)

Cocoa likes to sleep on the couch, too, but sometimes, if Cocoa gets there first, Katie decides that Cocoa is in her way.  So Katie barks at her.  And eventually Cocoa moves. Katie climbs up, but goes up on the back, so there’s no reason why Cocoa had to even go anywhere at all.  It’s clear that they have decided that Katie is in charge, even though Cocoa is, what, 40 pounds heavier?

I know, I know.  Dogs!  On Furniture!  It’s only this couch, and the couch is covered with a sheet.  It’s funny, though, when the sheet is off, either to be washed, or because we have company coming over, the dogs will look at the bare couch and contemplate it, wondering if they are still allowed on it.  Usually they decide the answer is yes.

I was hoping to wrap this post up with something profound or pithy, but unfortunately the 2 hours I spent with 9 5th and 6th graders this afternoon left me with a raging headache that I should have taken to bed an hour ago.  So, there you go.  Scroll back up to the cute doggie picture and then have a nice day.

**edited later to fix.  Told you I had a headache, don’t know why I called him a cocker.  I must gave been thinking of her highness, Katie…