I took this sock with me to the competition on Saturday, thinking I’d have some downtime to work on it.  Well, when I did, I pulled it out and discovered that one of my needles had gotten pulled all the way.  It’s a mystery.  The noisy cramped confines of  gymnasium bleachers are not conducive to picking up stitches on a sock, so I angrily stuffed it back in the bag and went back to being annoyed that it was taking the judges so long to make their decisions.

On Sunday, I spent the entire day cuddled up on the couch, doing some organizing of pattern files for my IQ, plus knitting, and watching TV shows on the Internet.  I was a complete slug.  It was awesome.

As a result, I was able to get the first sock of this pair almost done, and I did end up finishing it yesterday: 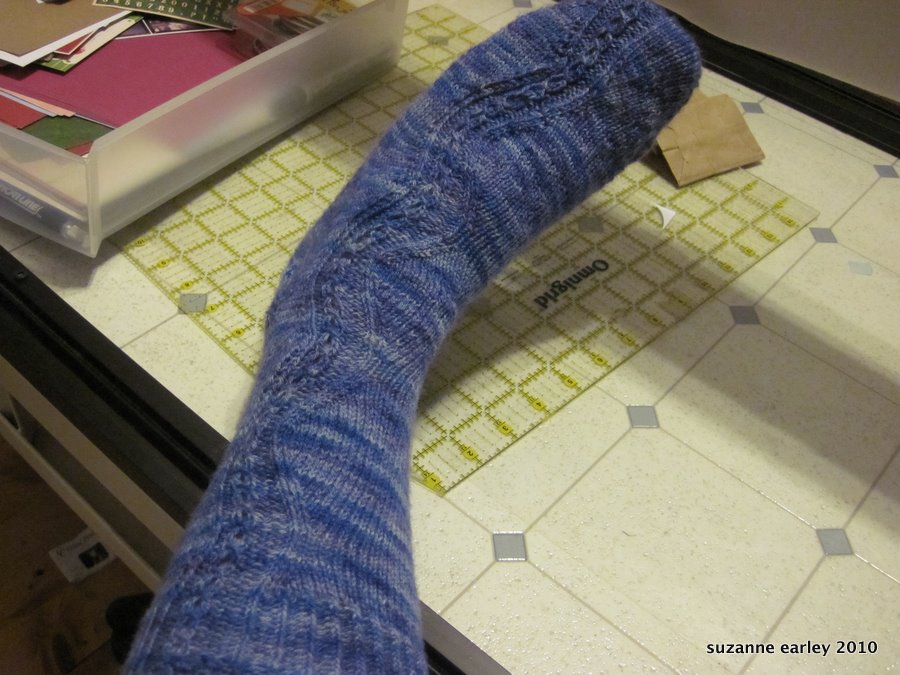 Do you know how hard it is to take a decent picture of a sock that you are currently wearing?  I nearly fell over, as I decided that to get the best light, I needed to hike my foot up onto the back of my longarm table.  Don’t try this at home, trust me.

This is Blueberry Bubbles and I just love it.  I would have shown it to you OFF my foot, but because of the decreases and increases, it looks kind bubbly when it’s loose.  Where the gusset, heel, and top of the foot come together: it’s the neatest sock I’ve done.  Go me!  The pattern has a twisted knit stitch on either side of it, and when you do the ribbing, the pattern calls for twisted rib (k1 TBL, p1, repeat).  Ribbing is a pain.  Twisted ribbing is torture.  Plus, I decided to follow the pattern and try the tubular castoff.  Meh.  It turns out I don’t actually mind Kitchener stitch, but I need a lot more practice to get the tension right.

Today was the Holiday Concert at school.  This was our seventh and FINAL elementary winter concert.  The best part of the whole thing is the kindergartners.  They are so stinking cute.  In some ways it’s just been a blink of an eye since Will and Joe were that size, but at the same time:  wow.  Seven years.

I do feel a little nostalgic, but mostly I’m thrilled to pieces not to ever have to go to another elementary winter concert.

Well, until grandkids, but dang, that better be a LONG LONG time from now.