You are here: Home / Blog / Other / A Dozen Orange Fleece Hats

Our Lego League Team asked me to make hats…maybe 2 months ago?  I’ve had the orange fleece for…maybe 2 weeks?

Naturally, I waited until 2 days before the competition before actually making them.  Because that’s just the way I roll. 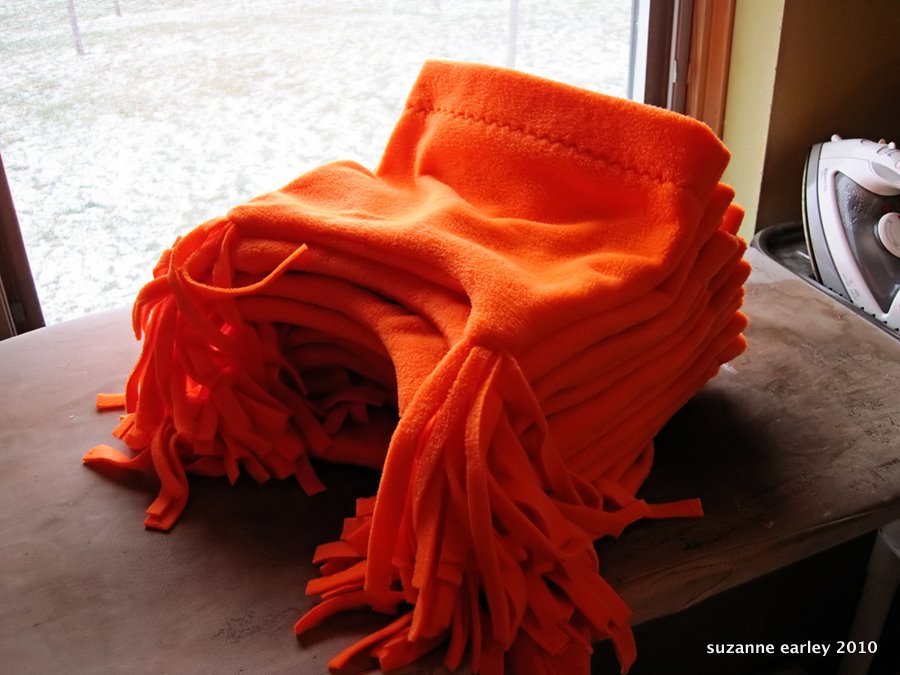 Yes, yesterday afternoon I made a dozen orange fleece hats.  With fringe.  Actually, I think that I’m up to 14 total hats, thanks to the prototypes I made before I got it just right.  The kids will all be wearing matching t-shirts, but in the past, we have noticed that teams with matching hats look even cooler.

Why orange?  Our team did a project on leukemia, and the “memory ribbon” color for leukemia is…you guessed it…orange.  And wow, this fleece is REALLY ORANGE.

I decided to go with this shape hat, with the two “points,” since anything else would have looked an awful lot like a traffic cone.

Now that we have the hats, everything seems to be ready to go.  The kids’ presentation is as good as it is going to get (they have memorized it, practiced it a lot, and it is quite funny), the interviews they have to do will be fine, and their robot missions:  if the robot works, it works great.  But it doesn’t always work, plus it’s harder to operate the robot in the heat of the competition.

One of the Core Values of the First Lego League is this, though:  What we discover is more important than what we win.

I’ll let you know how it turns out.

That’s assuming we don’t get the nasty winter weather that has been forecast for tonight.  Except, I’m trying not to pay attention to the weather until it is actually doing something, as opposed to the weather guys TELLING me it’s going to do something.