The calendar says it’s September 7 (well, now that I’ve flipped the page.  I’m pretty sure I had only manage to turn it to August about 2 weeks ago.  Sigh), which means it is ragweed season, which means I have eyedrops stashed in about a million places so that I am never far from a little bit of relief for my itchy watery eyes.

However:  my Mom conned me into making not one, but TWO pans of Cinnamon Streusel Coffee Cake for her to take to a meeting tonight, and now?

I’m trying to reconcile the fact that my calendar says September, but my nose says my house now smells like Christmas. 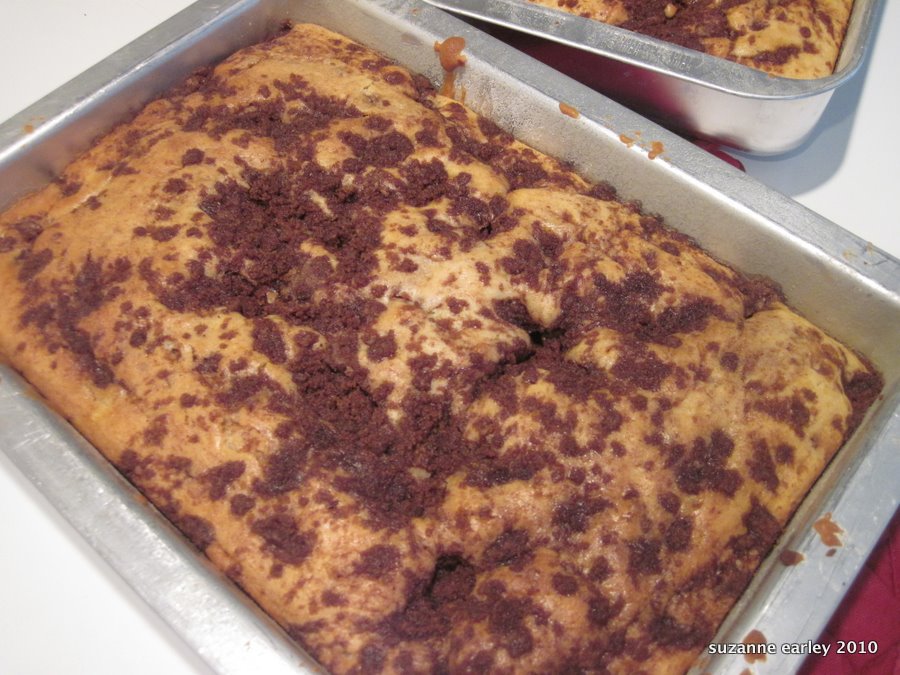 You need smell-0-vision to appreciate these. Mom as glad to hear that they turned out just about as perfectly as this recipe can, so she won’t be embarrassed to serve them this evening.

Christmas morning, as soon as the gifts were unwrapped, Mom would head to the kitchen to start making one or more pans of this lovely stuff.  It’s not health food, by any stretch of the imagination.  I don’t have many scent memories, but this, apparently, is one of them.

There had better be leftovers.  That’s all I’m saying.

(The recipe is posted here:  https://suzanneearley.net/2007/12/cinnamon-streusel-coffee-cake/  Oddly, I refer to smell-o-vision in that post, too.  Oh, and it was weird to read that entry, it was the day Mom broke her ankle.)

Mom usually makes this recipe, and we couldn’t remember the last time I had actually made it.  I think the one pictured in that post was the last one I made. It’s just a little bit strange that I considered it photo and blog worthy both times.

What’s even stranger is the fact that the program at Mom’s meeting tonight is about personal memoirs, which is partly why she chose this recipe:  clearly it’s important to our family!)