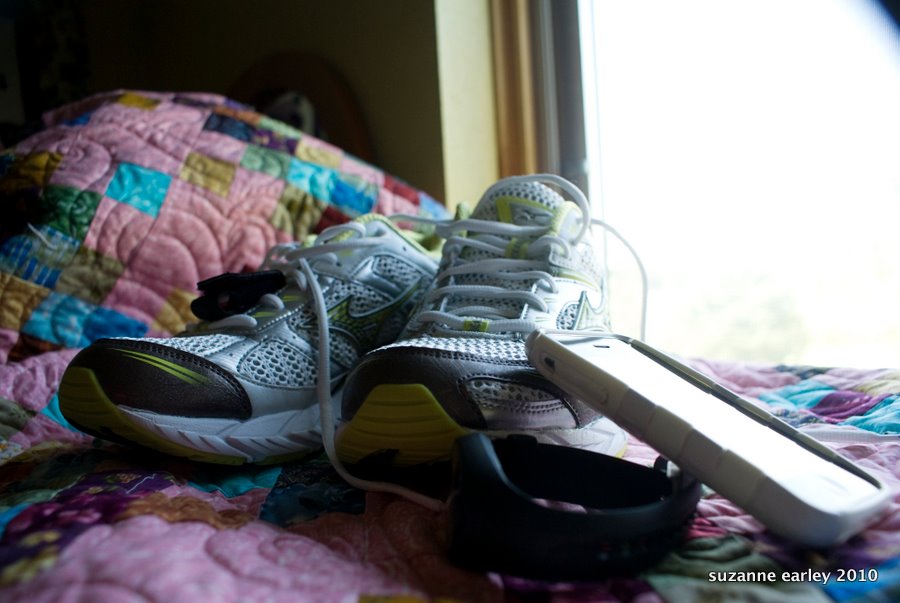 Clearly I survived the trip, and was able to log almost 16 miles of hiking in my fitness journal when I got back. CHECK

Well, I do have a weight loss goal, but that’s not really THE goal.  THE goal is to not die early from either heart disease or diabetes, both of which are in my family history.

Losing 30 pounds and getting rid of the poochy belly I’m sporting are specific goals, but they aren’t specific enough.  I decided I needed a shorter term, specific “thing” to work toward.

And that’s when I decided I wanted to be able to run in a 5K.

I sent Mark an e-mail telling him that I had this crazy idea.  I sort of expected him to agree with me that it was a little bit crazy, but I knew he’d still be supportive.

That would be awesome!  You do know that K stands for Kilometer, don’t you?

And that is how I found myself signed up to run in the October 23rd Des Moines Race for the Cure.  I decided not to think about it too hard, and just sign up already.  And I do plan to run it.  Don’t worry, I’m building up to it slowly:  it is 67 days away, and I’m pretty confident that that is enough time for me to SLOWLY work up to running the entire 5K.

I’m following the ubiquitous “Couch to 5K” running plan (that originated here), I have a fancy app on my iPhone that tells me when to run and when to walk.  I’ve just completed week 2 — and have logged 9.55 miles of running/walking.  One of the first things I did after deciding to do this crazy thing was to visit a running store — I am really like the brand-new Mizuno running shoes they recommended.  My feet don’t hurt at all — the main thing is that these puppies are MY ACTUAL SIZE.  I usually have to make do with 11s, but technically, I’m a 10.5 — NO ONE carries 10.5.

I still have a long way to go before I’m ready to run 3.1 miles in a row, and even though I read about how much people love running, I’m still in a love-hate relationship, but I’m giving it my best.

Because it is a Race for the Cure, I do have some fundraising to do, but here’s the deal:  before I go around with my hand out any further than it’s already been, I’ve decided that I need to prove myself a little bit more in terms of training, and maybe actually run an entire 5K before I get too obnoxious about asking for donations.

Don’t worry, I’ll be plenty obnoxious in the meantime about how much achy and sore I am.

I can tell you are thrilled to pieces to be a reader of my blog right now.