So, I didn’t get any further on the mini-quilt last night, because I was kidnapped.  The boys DEMANDED that I leave the house and the FORCED me to go to a free movie and partake of free root beer floats.

I was worried, as you probably recall, it was really hot and humid last night:  but remarkably, with the sun gone, the heat was better, plus a breeze picked up, and at times it was almost cool.  Almost.

See, it’s the Winding Stairs Festival this weekend, and the kickoff event is a free movie out at the baseball complex — someone has one of those big rear-projection screen thingies.   The set it up in the outfield of the softball diamond, everybody brings blankets/chairs and we sit out under the stars (and a couple of meteors from the Perseid Meteor Shower!!), and watch a movie.

There were also free hot dogs and free root beer floats — which were incredibly yummy.  Plus, we got to keep our HUGE 24 oz super heavy glass mugs.  I sprayed on the Off, but a few skeeters got through my defenses.

Thanks to the late night, I’m having a sort of slow start to the morning.  Had to exercise, clean up, and sit around and moan about exercising.

…there is no chance in that hot place that I’m going to applique letters that tiny…I’m not that crazy.  No, now it’s time for some embroidery.  First…though…I can hear the whip being cracked…better get some more quilting done!

Because it turns out I’m a big fat lying liar.  I started embroidering, and…hated it.  So I decided that I really am crazy enough to applique tiny letters: 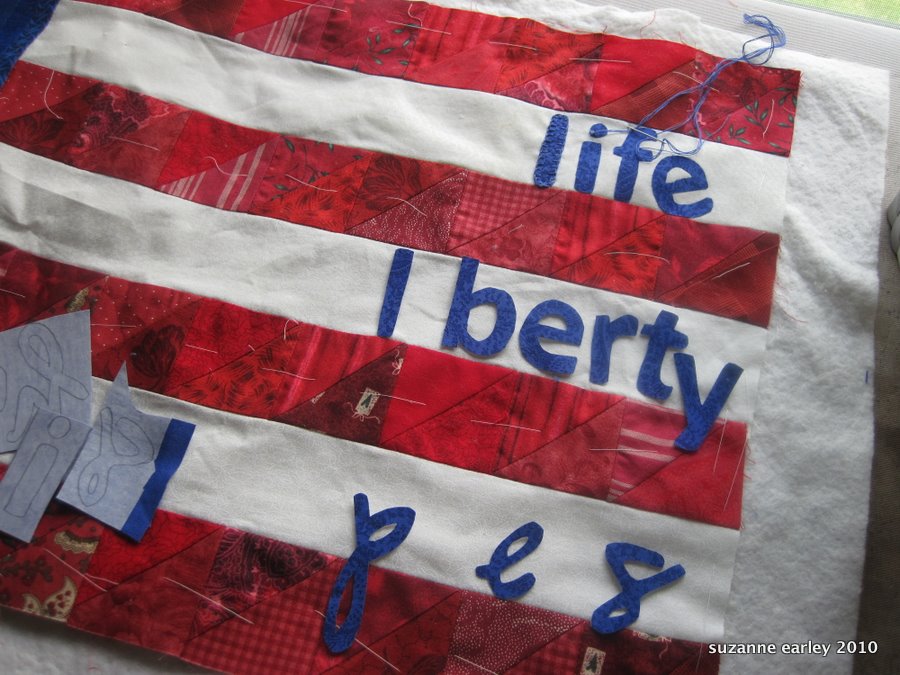 And I’m doing it by hand, no less.

Unfortunately, I haven’t actually earned the time I’ve worked on it this morning, yet, so I’d better get going on my pebbling.  I am hoping to have the pebbles all done today.

I won’t be reporting as often today, but I’ll try to at least let you know how far I get on those crazy little letters.