So, this installment is a little delayed due to the fact that (a) the boys wanted to go to the pool and (b) they thought they needed to eat supper before they headed out to football practice.  (Which, by the way, will be very HOT.  Uck.  It’s like Mother Nature knows it’s the weekend of our town festival, and thus she must turn up the heat to the high 90s as well as the humidity.  It’s like a bazillion percent humidity out there.  No joke.  Digression:  back in my misspent youth, I worked in Boise, ID for a summer.  It was really stinking hot, but it was dry.  I always had to laugh when everyone started to wilt when it was like 20% humidity.  You have not experienced humidity until it’s pushing 100%. Further digression:  ID stands for Idaho.  IA is Iowa.  Geographically challenged people get them confused sometimes.  I suppose if I squint and look at them funny, I can see how you could confuse them, but…in point of fact, they are two different states, in completely different parts of the country.)

So, where was I?  Ah yes:  further progress.  On the machine quilting front, I am now down to 3 half feathered wreaths, plus part of a quarter feathered wreath, and then the rest of the pebbling.  Oh, and the borders.  But that’s a lot further along than when I started this morning.

On the mini-quilt front, as I suspected, I did get the top together: 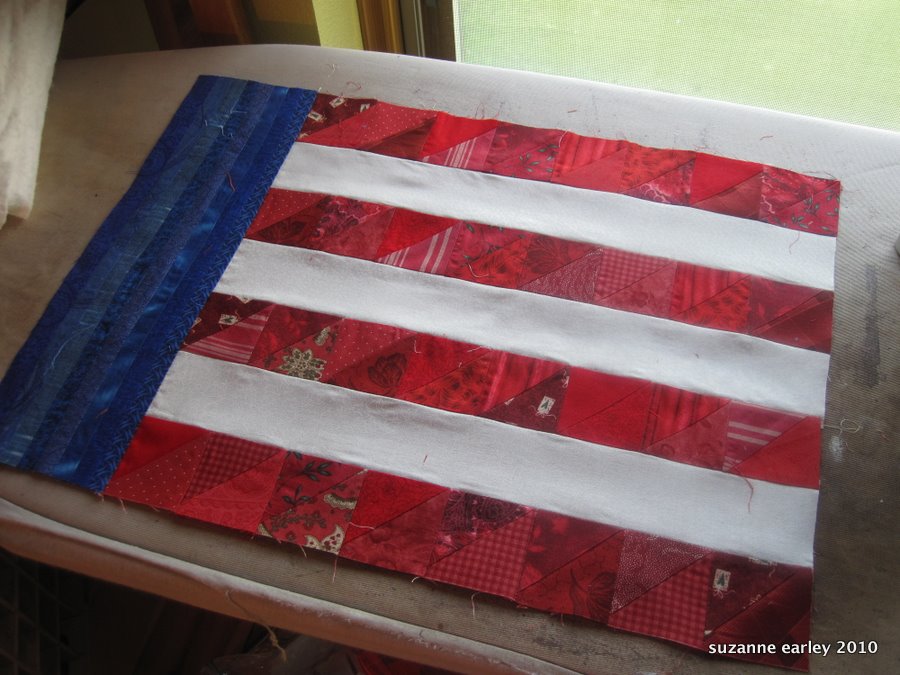 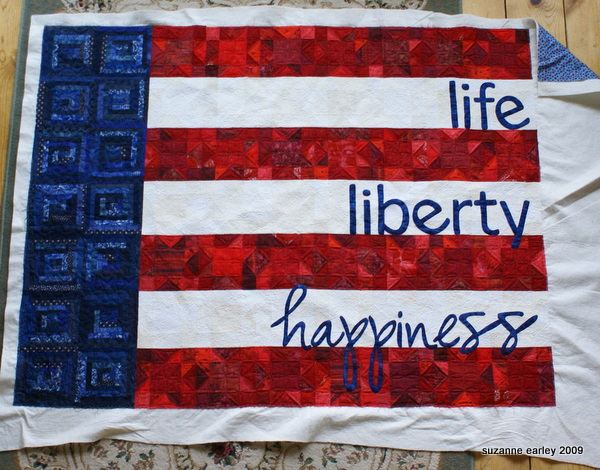 My mini-quilt is not exactly a miniaturization of the original, lap-sized quilt.  It’s more of an adaptation.  The little one will measure 14 by 20 (ish) when it’s finished.  The big one is approximately 56 by 72 (ish).  The original quilt has pieced blocks in both the red and white stripes, but I decided that in this smaller version, it would be less distracting to have just a plain strip for the white, rather than the pieced triangles.

Of course, there is something missing from the little one, yet…but there is no chance in that hot place that I’m going to applique letters that tiny…I’m not that crazy.  No, now it’s time for some embroidery.  First…though…I can hear the whip being cracked…better get some more quilting done!