To catch up: part one and part two and part three.

After a little bit of lunch (leftovers), and a slight sidetrack while reading some blogs (read an article about a guy who had done a bunch of experimentation to recreate the Animal Style In-n-out burger (which I’d never heard of…well, In-n-Out burgers, yes, animal style, no…), which led to an article about the same guy who did all kinds of experimentation to figure out how to recreate McDonald’s French Fries.  The Internet is awesome, no?) and then back to work.

The end of the pebbling is not exactly in sight, but it grows ever closer.  I have some more feathers to do before I can do any more pebbles, so that felt like a good time to take a quick mini-quilt break.

I meant to press my HSTs and then only trim a few, but then I got carried away, and now all 32 are ready for the next step: 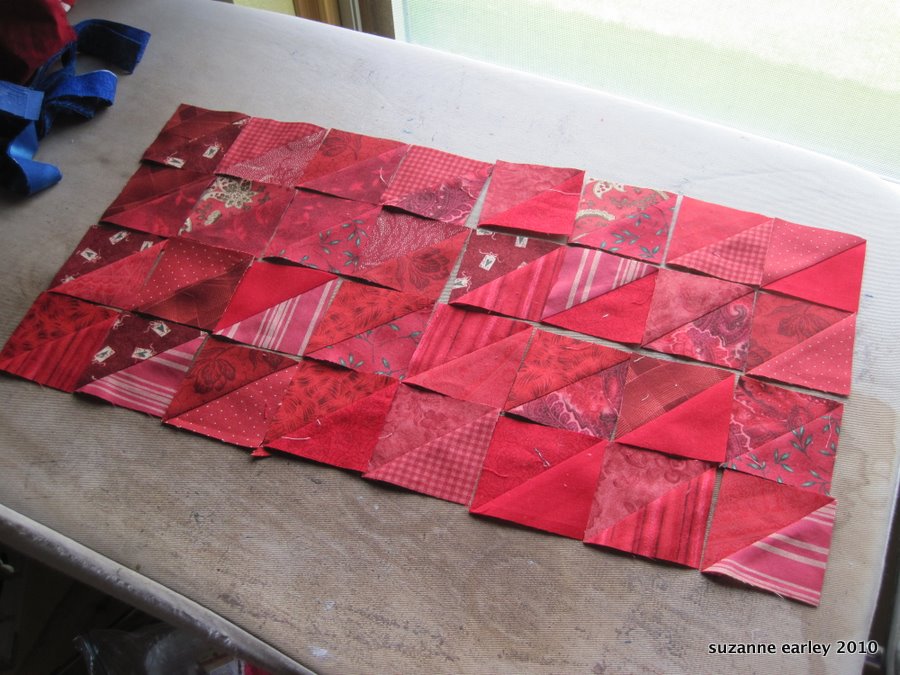 (Those are trimmed down to 2.5 inches square, so they’ll finish at 2 inches).

As I mentioned before, the quilt itself isn’t very big, so it’s entirely possible that during my next break, I’ll actually get the entire thing assembled.    There is going to be some embroidery, and then of course it needs to be quilted, and depending on how the pebbling goes, I may just pull off the big quilt and take care of this little thing later this evening.

But for now, my boss says it’s time to get back to work.  She’s such a drag.