Also, they are crazy.

OR maybe it’s me that’s crazy.

I was sitting here at my desk yesterday, when I turned around and saw this: 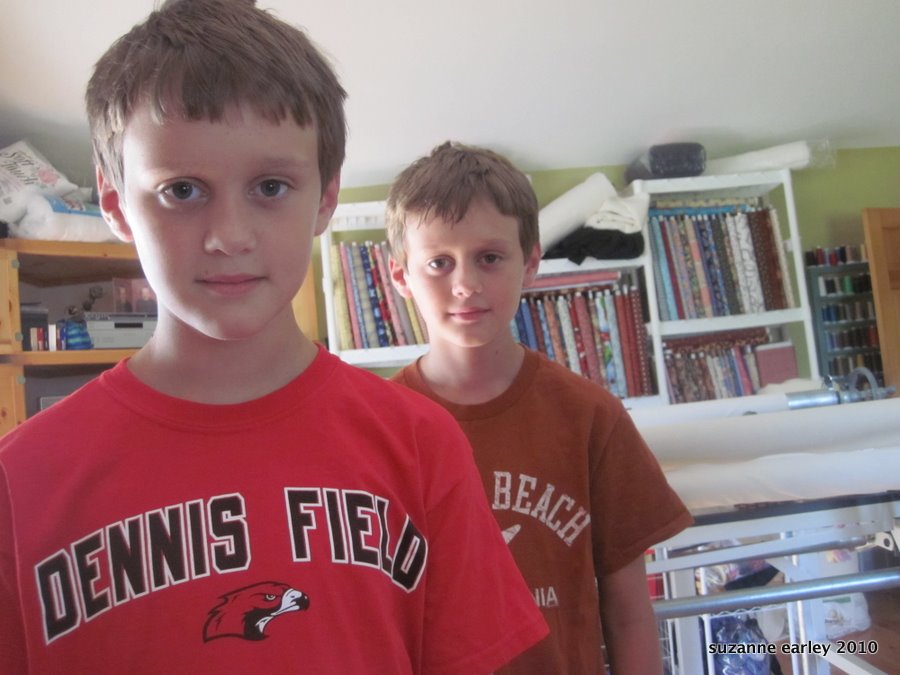 OK, this pic was a bit of a reenactment, but seriously, this is what I turned around and saw.  These two yahoos in my face, clearly wanting…something…

Offspring:  Mom, can we have some ziploc bags to fill up with water, take outside and blow up?

Offspring:  Yeah, we accidentally exploded one in the sink and want to do it some more, on purpose.

Mom:  So *that’s* what that gut-busting giggling was about a little bit ago.

They spent…I dunno…an hour?  More?  Filling up ziploc baggies, taking them outside and tossing them on the ground, or smashing them in their hands.  I let them each have TWO, because I didn’t want to be totally wasteful, but those 4 baggies?  Endlessly entertaining.  The first time, apparently, it explodes the seam at the bottom.  After that, you twist up the exploded end, toss it, and then the water explodes out the zipper top.

The funniest part was when they came in and asked me if they thought it was OK if they tried to sneak up on Mark and soak him with ziploc baggie water bombs.

I told them, sure, you can try, but the chances of you two goofballs actually sneaking up on him?  Yeah, I wasn’t too worried that he’d be surprised.

The last 2 weeks or so, they have just been wacky beyond belief.  I think there is some testosterone involved — they have never really been into hitting or fighting, but every time I turn around one or the other is poking, punching, or generally beating on the other (in equal proportions, plus they have a pretty well-defined sense of equal justice:  he hit me once, so I get to hit him once…).   But it’s not like they are *mad* at each other, beyond the initial, you wronged me so I have to beat you reaction.  (I’m pretty sure about this, because there is generally a lot of laughter involved, as well…)  On top of this, they have been doing a lot of plotting of evil-genius plans.  At least, I think that’s what they are doing.  There is a lot of whispering and sidelong glances to make sure no one can hear.

We went to see The Sorcerer’s Apprentice Saturday night, and there were Tesla coils and electricity and OH. MY.  –> The wheels have been turning ever since.  They have pulled out the science books and the batteries and Daddy’s volt meter and have this evil AURA of PLOTTING about them.  Electricity!!  Can we take things apart!!  We want to electrocute ourselves!!  Will spent part of the day attempting to fix our broken front doorbell (driving us insane as he pushed the button over and over…).

It’s crazy around here.  Crazy-crazy AND crazy-awesome.  I complain a lot at the craziness, but…I don’t really mean it, because apparently 6th graders are pretty awesome.  Except when they are crazy.