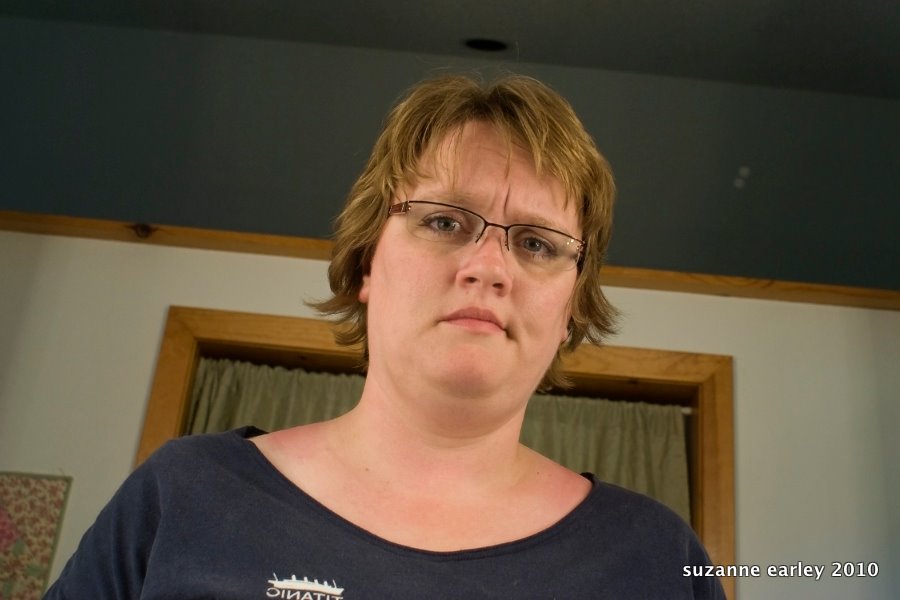 That is the “I know I put on 50 SPF sunscreen” look.  Or maybe it’s the “I need remedial sunscreen application instruction” look.  I thought the continuous spray stuff ought to be pretty idiot proof, but apparently not.

Ah well.  It’ll heal, the skin will go back to white, and then I’ll probably burn it again.

The hair is courtesy of watching 3 baseball games in the wind today. Did I mention I get to watch a lot of baseball this month?

Hey!  I altered another t-shirt today.  I think I got the neckline a little too wide, though, especially since there’s no ribbing — I’m having a little trouble keeping my straps covered up.   I also made this one a little roomier than what I worked on yesterday.  I’m still tweaking and figuring out what I like best.

And no, I will not alter anyone’s shirts for them.  My sister has a brand-new-to-her sewing machine, I’m pretty sure she can do this herself.  And I’m pretty sure the rest of you are quilters, and know how to operate sewing machines and scissors, so…get to it!  The cool thing is that you can turn your boy shirts into exactly-perfect-for-YOU girl shirts.   I feel like I’ve found a whole new wardrobe, since I had stopped wearing so many of these t-shirts.  I just wish I had back some of the ones I’ve gotten rid of over the years.

I wonder what kind of cool t-shirts Mark has in closet.  Do you suppose he’d notice if I start altering them to fit me?

(Last night he got home, and I said “Look at my new shirt!”  He said “Don’t you already have one just like that?”  I said “Yeah, it’s the same one, I cut it up.”  He said “Why would you DO that?”  I said “DUH, look at it!  It looks so much better!”  I had to drag him to the computer and show him the before and after shot to see the dramatic difference.  Still not sure he got it.  He has good taste in women, but not necessarily in women’s fashion, I guess.)

I did finish quilting a quilt today, but did I mention that I’ve been to 3 baseball games today?  Taking a picture of a quilt seems beyond me at the moment.  It’s a lot of work sitting on the bench worrying about your kid (times two).

p.s.  The boys’ teams lost both of the games they played in.  (they didn’t play in the first game, but they have to be there to watch it).  They tried though:  they had some hits, and they both pitched tonight and did well.  They just need more practice.  it’s different pitching when there is an actual batter standing there.

p.p.s.  Did anyone else watch Glee last night?  I love Glee.  It’s not a perfect show by any means, but I think it’s pretty wonderful.