A confluence of events:

1.  When we were out in New York, I wore my Superman shirt.  I was reminded that I don’t really like wearing it (even though I love it), because I spend the entire time I’m wearing it tugging at the neckline.  It’s a men’s large, and the neck always feels like it’s choking me, which is why I usually by men’s XL if I’m buying t-shirts that only come in Men’s sizes.  I made a comment to Mark about wanting to cut the neck off, which I’ve thought about before, but never quite manage to ever get around to actually accomplishing.  He looked at me with horror.

2.  My souvenir from the trip was a West Point shirt.  It is a Women’s XL and my new favorite shirt.  It has a scoop neck and the side seams are curved.  It’s probably a little more fitted than I should be wearing, but as we all know, I’m exercising and trying to eat less, so that should be a non-issue here in the near future.  You can see a tiny bit of it in the picture of me from June 2.  Mostly, you notice the Nike logo, I guess.  At least, that’s what my sister noted.

3.  I’ve been reading the Fit To Flatter tutorials at stash, knit, repeat.  It’s a fascinating series, she uses real people and really great visual examples of what different shaped people look like in different clothing.  The series is aimed at sweater knitters, but I wouldn’t let that put you off from reading through the information.  The most recent article was about necklines, and it kicked me in the butt:

Dudes, I’m well-endowed.  Well-endowed women look best in v-necks and scoop necks.  Also, I have almost no discernible waist or hips and have learned from other clothing experiences, that I look better in tops that have shaping in the waist:  Men’s XL t-shirts do not have any shaping anywhere.

So, I got out my scissors and started altering.  (OK, first I altered another, not-s0-important t-shirt, from which I learned several lessons, but then I went to work on Superman…). 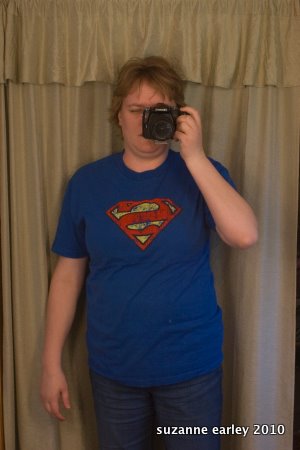 You are overwhelmed by the attractiveness, I can tell.

Here’s what my new West Point t-shirt looks like on top of the Superman t-shirt: 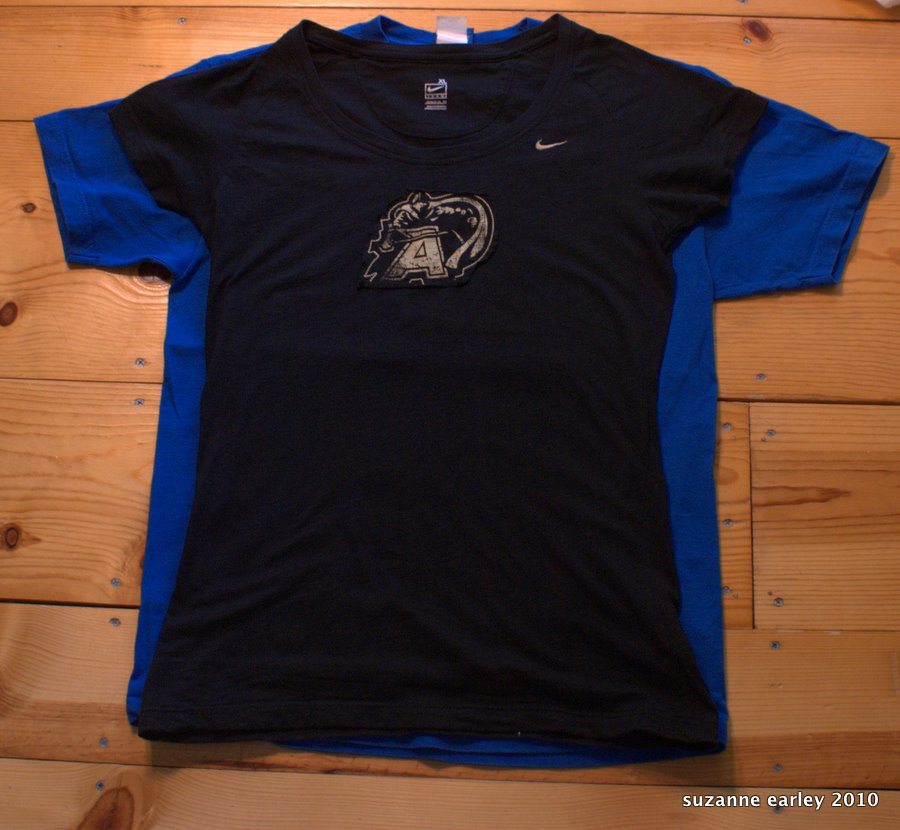 I traced the shape of the body of the black shirt onto the blue shirt, and then cut it out with about a half inch seam allowance.  I cut the sleeves shorter, too, and added an inch to the ends for a hem.  The neckline was traced from a circle template — I drew the scoop in, then cut it out with my hem allowance.  Turned the hems, stitched them in place, sewed up the side seams and then voila:

Almost exactly one hour after taking the top picture, I was able to take my picture in the finished product.  (And I didn’t even actually work the entire hour on it, I was interrupted several times by  boy-monsters and by a quilt that the IQ is working on…): 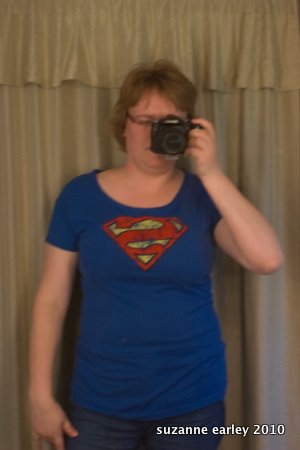 That is about a bazillion times more flattering, don’t you think?  Here, I’ll even put the before and after side by side so you can see the difference: 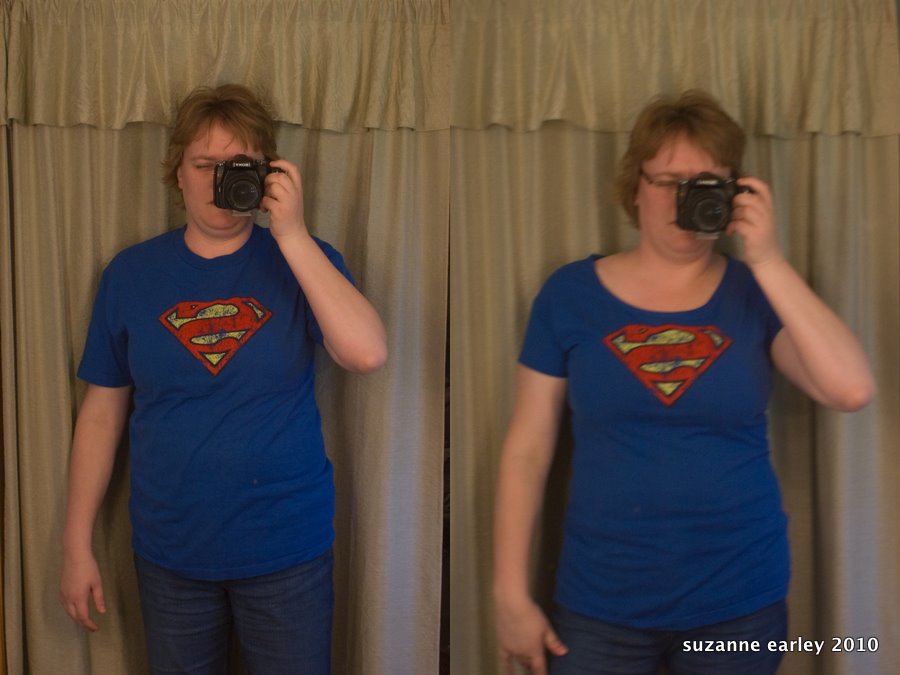 The sleeves are a little snug, so when I do this to another shirt, I’ll keep that in mind.

I’m also FEELING like Superman today (OK, maybe Supergirl…).  I managed 3 miles on the elliptical this morning, with the resistance at the midway point, and used my arms the whole time, too.  It felt awesome.  I could have kept going, but I had other things to do (like, t-shirts to alter!).

I had to borrow Joe’s iPod in order to do it, though.  He’s a little horrified that I had to put some of MY music on HIS iPod.  He’ll live.

I had to do it, though, I had new Glee tunes to listen to!! Don’t bother me after 7:59PM CDT — I’ll be busy watching the season finale!!!