My mother-in-law’s strawberry patch has been extremely prodigious this summer, and we have been eating many strawberries.  Last weekend we made fresh ice cream (with heavy whipping cream, OMG) and fresh strawberries on top?  Where has that been all my life?  I’ve not been a strawberry eater, and I have to admit to needing to sprinkle on some sugar, but Strawberries on Fresh Homemade Ice Cream? Wow. 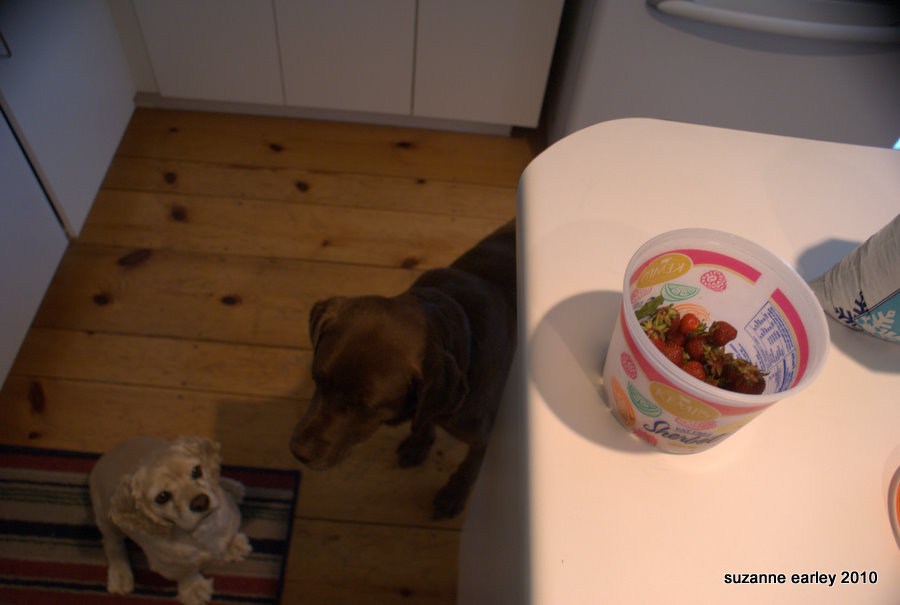 Katie got to try a strawberry a few days ago when I accidentally dropped one.  She picked it up.  She dropped it.  She pushed it around.  She licked it and sniffed it and eventually wandered away.  We picked it up and tossed it to Cocoa who swallowed it right down, I suspect she didn’t even taste it. 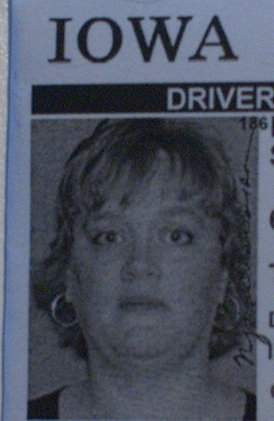 Yup, it was time to renew my driver’s license.  This is a temporary paper license, the Iowa DOT now mails your actual license to you.  You’ll note the lack of glasses as well as the lack of smile:  both new rules since my last license.  In actuality, I’m not sure that if you compared the 2 pictures (old license and new), that you’d even really guess they were the same person.  Ah well, I’ve seen worse pictures on driver’s license.

I tried to take a picture of me and the boys together:  it was the last day of school, so summer vacation time is here.  Although, I’m not sure that they’ve done any actual school work in about a week.  Unfortunately, the angle I was taking the pictures from was not flattering to me, and I’m vain enough not to share those particular gems.   And I was pushing my luck getting them to let me take ANY pictures, let alone as many as might have taken to get one decent one of all 3 of us.

Not that that picture above is a decent picture.  It looks like something you seen on the evening news.  *Shudder*

Speaking of news, I know you’ve been waiting with baited breath for the sports report:  the boys’ team won their first game last night.  14-5 I think?  Will and Joe moved around to different positions (outfield, and then maybe Joe on First and Will on Third?  something like that), and both got hits (Joe had a double, Will had a single).  I think they both scored at least one run.

And…other than…I have nothing else new to report on any other front.  Nothing quilty, nothing knitterly, nothing.  Oh, I bet you are dying for a weather report.  Yeah, it was gorgeous again today.  Maybe edging towards a little steamy, but not too bad.  Maybe some thunderstorms tonight.  Don’t you feel better knowing that?  I thought you would.