The boys got invited to join the A team for a tournament today (normally they play on the B team, but the coach needed some extra players for potential subs).  They knew going in that they’d mostly be on the bench, but… 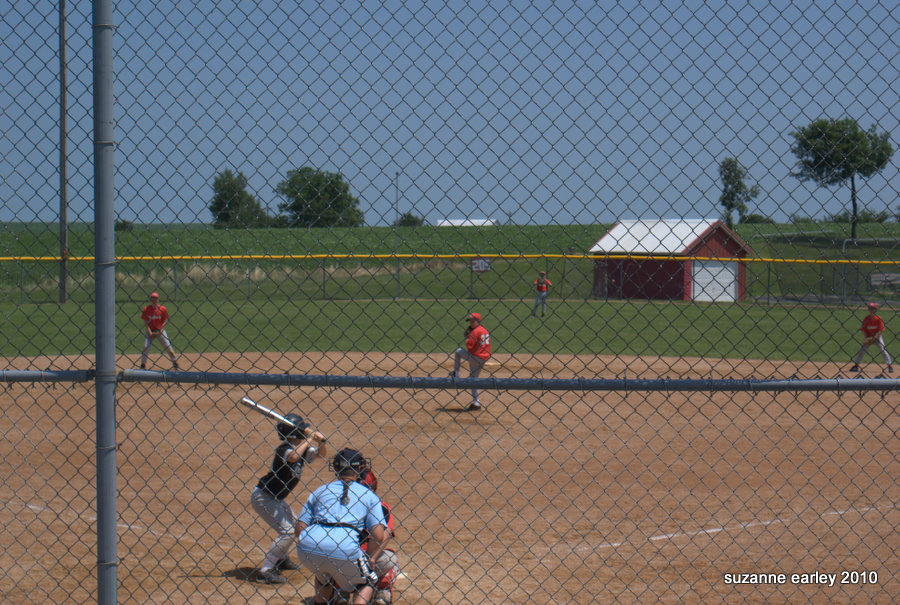 It was pretty cool when the announcer said “Now pitching, Earley.  And in right field, Earley.”

Yep, number 32, Will Earley got to pitch 2 innings.  He did pretty well.  They got more hits off of him than he’s used to, and unfortunately, the infield didn’t field as well as they normally do, so they got a couple of runs, but he did his best, and that was the important thing.

Joe was out in right field and didn’t see any action.  They both got hits, but I think they both hit it right TO someone, which was kind of a bummer.

In the 3rd game, Joe got called to “courtesy” hit for someone, it was totally last second, he went up there cold, but after he woke up and realized where he was, he actually hit the ball into right field and got on first.  Unfortunately, the next 3 batters all struck out.

They’ve been getting really frustrated with themselves for either striking out or getting thrown out at first.  Apparently they didn’t realize that a really good batting average in the MAJOR Leagues is like .300, so…when Mark told them that, they were astounded.  And felt better.

After 6 bazillions hours sweating our way through 90 degree cloudless weather at the baseball diamond, I came home to a birthday present from my sister.  Completely frivolous, and completely awesome.  I wore them to the movie theater tonight and got a ton of compliments on my zebra shoes.  Thanks, Deb.

p.s.  Once again, I managed to correctly apply (and reapply) my sunscreen, 0nly I forgot about my temples.  I did my ears, my nose, my cheekbones, but you can see where my sunglasses were on my temples, because the rest is red.   Oops.