You are here: Home / Blog / Quilting / Another one from the vault

I know.  It looks like I’m being really productive, but it’s mostly my IQ doing a lot of work while I sit around and surf the web.  (I posted on MQR that I need to name my IQ since it has become such a productive “employee” — Mom suggested Bess, which led me to wonder about  Nancy Drew’s other BFF, George.  Now I’m thinking I might have just named both my quilting machine and my IQ.  Bess might be the A-1 and George might be the IQ.)

This is another ancient quilt.  I started teaching some acquaintances how to quilt (2003?  2004?  something like that), and we were making a sampler.  We didn’t last for more than about 3 class sessions, and frankly, I’m amazed that I even actually finished this quilt top. 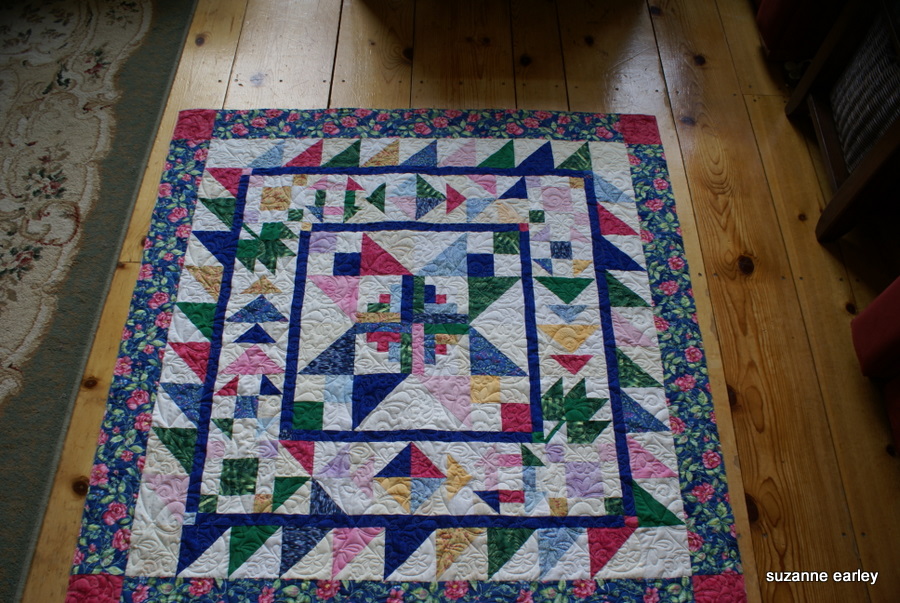 I think it’s a Kim Diehl pattern, maybe from a magazine? 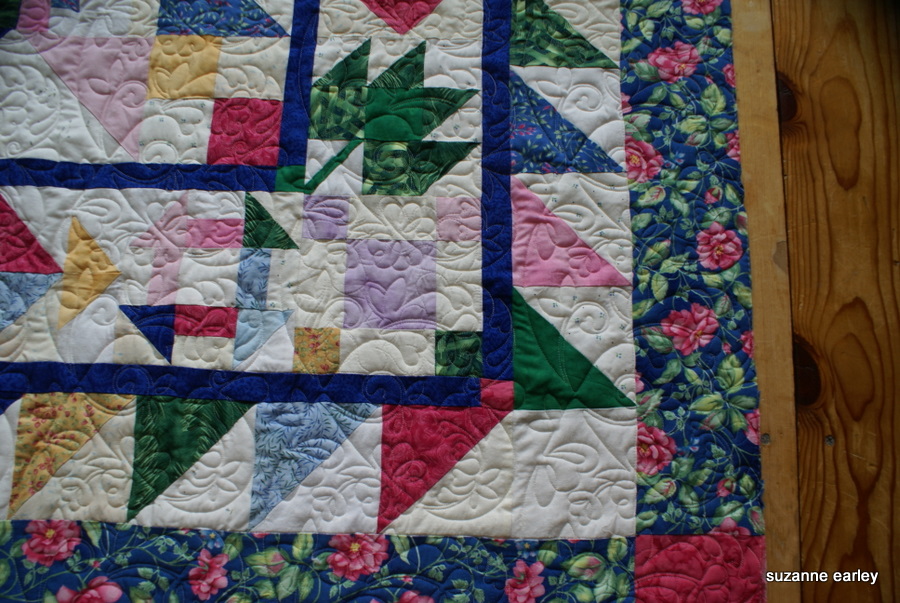 If I were to make this quilt again, I’d do a number of things differently.  For starters, I probably wouldn’t bother because I don’t really like samplers all that much.  But if I actually did make the quilt, I wouldn’t choose so many different colors.  And I would have paid more attention to the values of my fabrics — some of those pinks and lavenders are way too light compared to the dark blues and greens.  I think it might have been more successful with maybe all pinks, or all greens, or something.  I really really like that border print, and wish I had more of it. 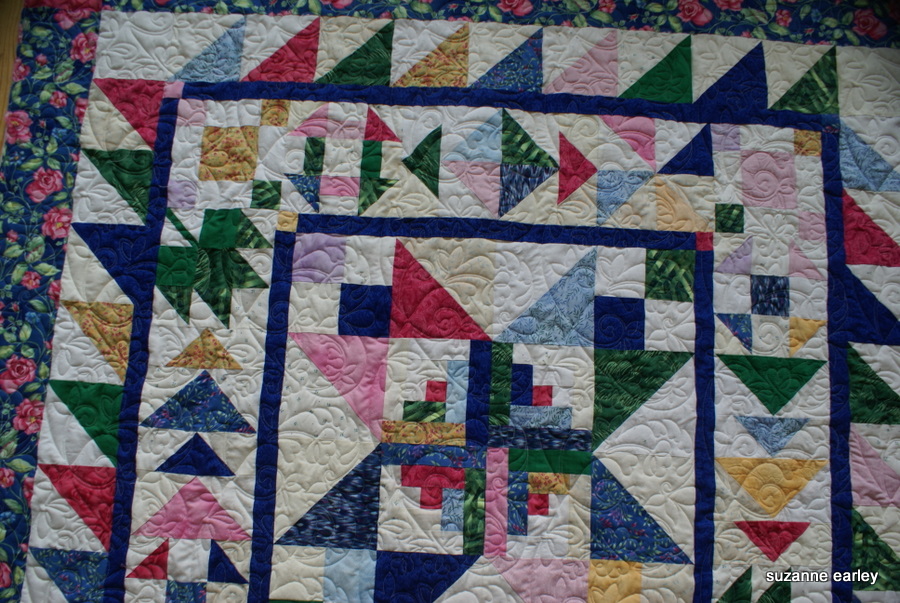 Some time shortly after finishing the piecing, I started quilting.  And it was baaaad.  Scary bad.  Messy feathers in white thread on dark patches.  Luckily, I stopped myself before going too far.

I’m in the mood to finish things, so I made the crazy commitment to take the time to finally frog that nasty mess and load it up and let the IQ do an allover design.

The design is called Secret Garden and was designed by Anne Bright.  I’d link to it, but it’s not available to the general public until next month (it was part of a pattern club, don’t be thinking I’m all amazing and have some inside track.  Well, I guess I do, but I paid for the privilege…). 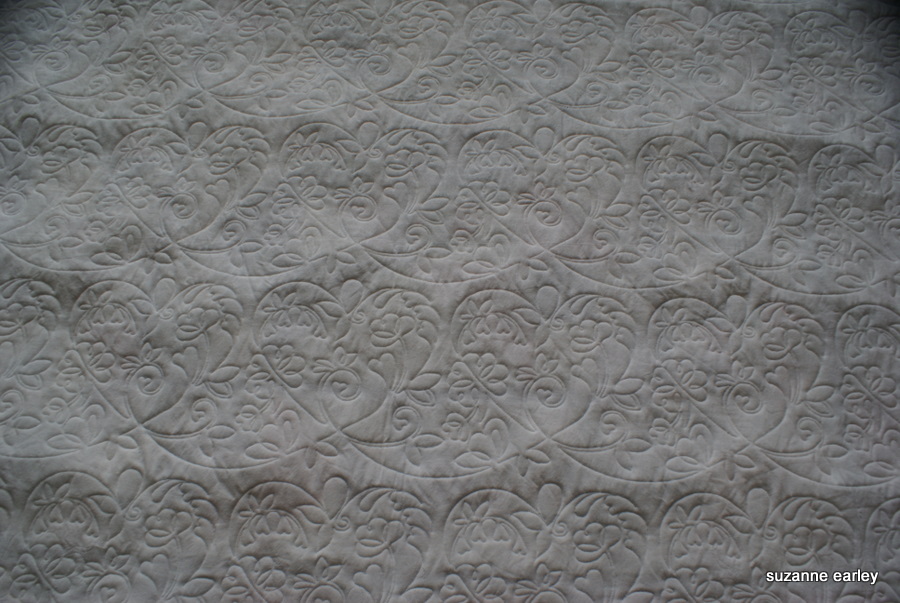 You don’t notice the rows of this one on the front, it’s so busy, but on the plain white back, you can definitely see the row-y nature. 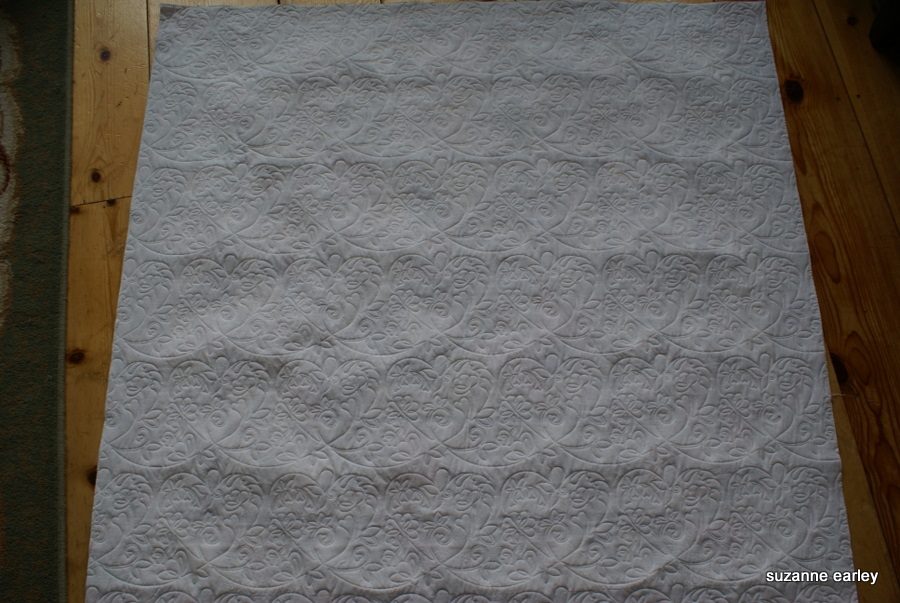 Remarkably, I have the binding for this one set aside (made and pressed!).   Looking at this quilt in the pictures, rather than real life, I find that I like it more than I did before, but once it is bound, I think I’ll find a new home for it.