You are here: Home / Blog / Other / I’ll stop teasing, but you might not be able to handle the cute

So, apparently, I watch more romantic comedies than I realized, because I think I’ve seen most of the ones you guys have listed so far!

So, here’s the really cute thing I made last night: 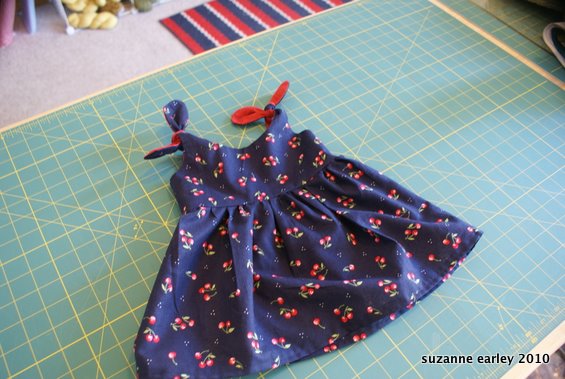 An hour, tops.  I intended to work on a little dress for Hannah’s Bitty Baby, but the pattern I was using was intended for a real baby, and instead of modifying it for the smaller doll, I thought, “Hellooo, you have a brand-new niece arriving in the next 2 weeks, maybe you should just make a dress for her.”

It’s based on this tutorial:  Itty Bitty Baby Dress, which calls for piping at the waist, and purchased bias binding for the hem — I skipped the piping and just turned a hem.

It was ridiculously simply, the bodice just ties at the shoulders, the skirt was made out of 2 rectangles.  When I make another one, I might take a little bit longer to do some nicer seam finishing, but for a first try, I think it turned out pretty sweet.  I’ll be anxious to see if it even fits the new little person, and I promise (since I’m going to the post office every 5 minutes shipping orders…) to actually MAIL this before the new little person arrives.

Over the weekend, when I was suffering, I did spend some time knitting.  (Well, I didn’t on Sunday, omstly on Sunday I Just lay in my bed and moaned).  But Saturday Monday?  I totally cranked out some knitting.  Not the socks.  I couldn’t face those little bitty needles.  But I finished the parts for the knitting project I teased you with a few weeks ago: 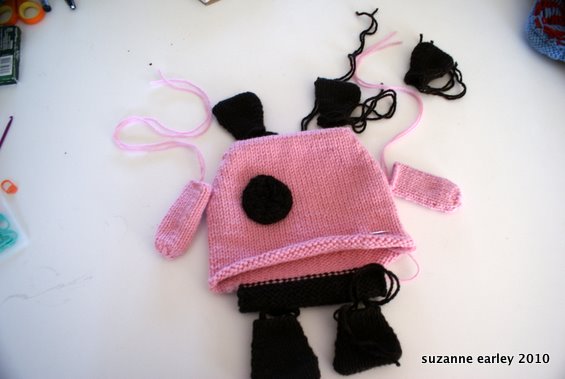 It’s a stuffed monster.  Apparently I can’t count, and made too many ears.  I still have to stuff it, sew it all together and attach the eyes.

The pattern is Penelope the Empathetic Monster.

I also decided that because I was sick, and because..well, just becaues, I deserved to start a new project.  This is a long-term knitting project: 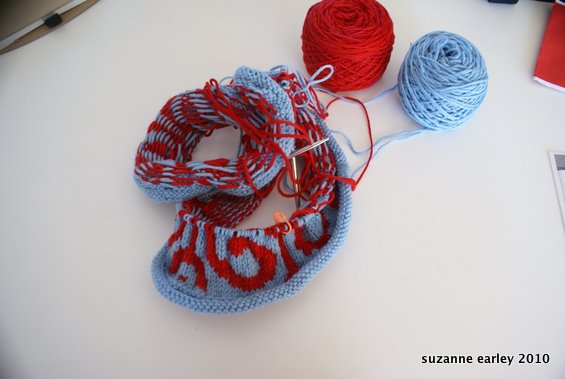 It’s from the Mason-Dixon book Knitting Outside the Lines and is a blanket called Liberty. (Ravelry link)  It doesn’t look like much right now, but hooo boy is it purty…

And with that, I must sign off, and return to the grindstone for a short while before I head up to take my darling husband out for lunch.  Tuesday was our 14th anniversary, and I was so not up to eating much more than toast that day.  I’ve got my appetite today, though, and am even planning to order dessert!!