You are here: Home / Blog / Other / Knitting Olympics: Off to a good start

The Knitting Olympics, as conceived of by the Yarn Harlot, is an event for knitters who want to challenge themselves by casting on a project during the opening ceremonies, with the intention of finishing said project before the end of the closing ceremonies of the 2010 Winter Olympics.  The project should be a challenge, but you shouldn’t set yourself up for failure with a project that’s impossible.

I decided I was just whacko enough to give it a go.  I swatched on Thursday and Friday, and debated about what I was doing, but eventually decided to go ahead with a sock knitting project that includes stripes and Fair Isle: 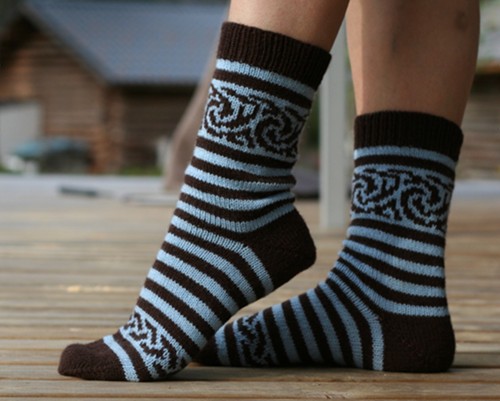 Told you I was whacko.

The pattern is called Vellamo, and it can be found on the designer’s blog here, but I found it on Ravelry (in English…) here.

I thought I had the right stitch count and needle combo, but I got all the way through the toe during the opening ceremonies…and then realized that it was going to be too big.  After that false start, I started over with smaller needles and between yesterday and today, I’ve already got 4 inches done: 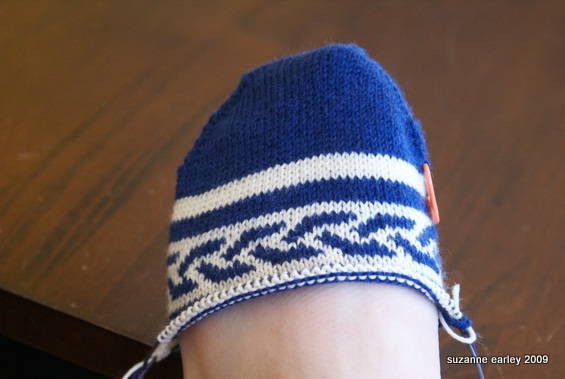 I’m using Heritage sock yarn, on size 1 needles — two circulars, I have realized I can’t stand DPNs.  The pattern calls for 64 stitches, but…I have big feet.  The pattern at the top of the sock is a 16 stitch repeat, which is a lot to add, and the cause of my initial gauge problem.

I’m always jealous of people who post their sock projects on their blogs — the ones that have made an entire pair of socks in what seems like an impossibly short amount of time.  I finally figured out why I don’t seem to be able to hand-knit them as quickly:  y’all must have tiny feet.

In order to make a pair  in the length I want, I have to average approximately 2.25 inches per day over the 16 days of the Olympics (I’m not counting the opening ceremony day since I got nearly 2 inches done that day and had to rip them back out…).  I’m going to able to get more in today, so I’ll stack the deck here earlier on while I’m fresh and do as many inches as I can…

And here’s how truly whacko I am:  I REALLY like doing Fair Isle.  Seeing pattern emerge is SO cool.  It feels a little awkward so far, but I think I’ve gotten the hang of it.  Now, I’m dreaming of the blanket Liberty from the book Mason-Dixon Knitting Outside the Lines. (Those are both Ravelry links).

But I guess you already knew how whacko I really was.  At least I’m consistent.