You are here: Home / Blog / Quilting / Note to self

If you want to applique motifs on cute little girlie clothes, maybe stick to just one or two or even three cutely placed motifs.  ALl the way around the hem of the skirt is cute but… 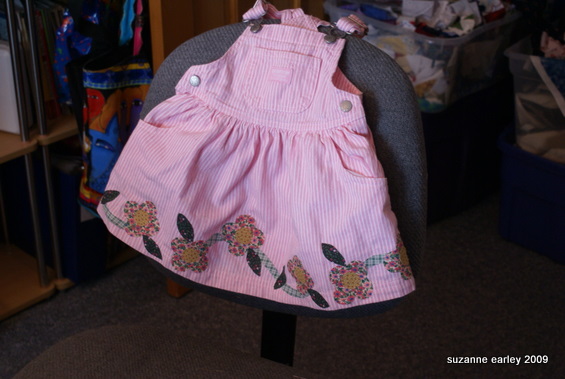 Actually, that should be a note to my mother, as she’s the one that cut out and fused all of those flowers and stems and leaves.  She started hand buttonhole on the edges, but decided she didn’t like it (can’t remember why, it’s been awhile), and I volunteered to do it on the machine.

The dress is a 24 month size Osh Kosh denim jumper.  It’s even cuter in person.

Did I mention that she started making this back when it would fit my niece Sofia?  Who is now 10?

Um, yeah.  Apparently it dropped into the abyss and while I’ve seen it every so often, I couldn’t quite bring myself to tackle it.  I don’t know why not, because even though I might complain a little bit, once I got going, it didn’t take forever…

I was inspired to get it done because little Miss Hannah is actually the right size for it (and will have an occasion to wear it next month! i promise to send it to you in a timely fashion, deb), and then when she outgrows it, it can be passed on to some other small fry.

In addition to that little project, I also spent part of today pulling out and examining various projects, and then putting them back away.

One thing I did spend a little more time on was this: 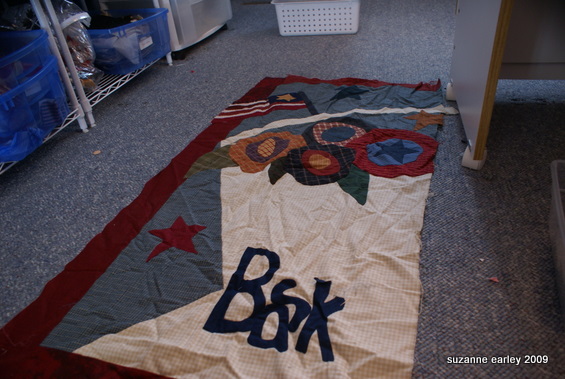 It’s designed by Country Threads, and I actually bought it as a kit at their shop several years ago. The lettering is supposed to say “Liberty Basket” — all of the applique on this one has been done by hand, with good old-fashioned needleturn, but it’s been sitting in this state for awhile.  I’ve never been really happy with the lettering, partly because it’s a pain to applique, and partly, I realize now, because I really dislike the folksy look of the “font” they used.  Yeah, the big flowers are very folksy, etc, but the lettering just isn’t cutting it for me. 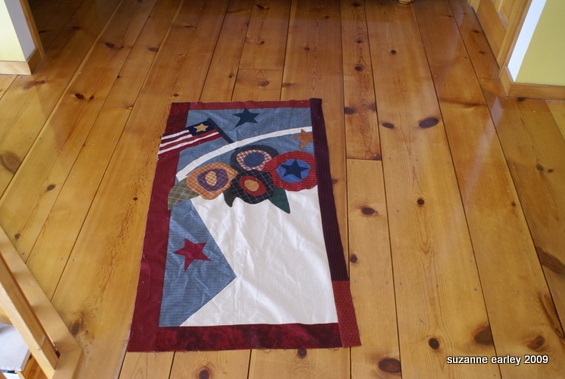 And it has it’s final red border, only now that I look at it in the photograph, I think that top red on the right might be too dark.

But now, that great big basket looks kind of empty.

It’s back it in it’s plastic bin, awaiting the day when I decide what to do next.  Maybe some different lettering?  Maybe different words?  Maybe some really cool quilting?  The skies the limit!

So what did you do today?  Anything fun?