I’d be seriously dangerous.  Yes, it was one of THOSE days today.  I probably shouldn’t have even attempted to drive my car or run the quilting machine, but I managed to do both of those things just fine.  The problem is all of the little stuff that makes me crazy.

Mark asked me to do 2 things for him.  Print a report and write a check.  About 10 minutes after I’d gotten downtown this afternoon, the phone rings.  I had forgotten to do BOTH.  SO…Mom kindly let me run home while she kept watching the shop (tough job, I don’t think anyone came in…), as long as I took her coat with me, so Mark could look at the zipper.

I was nearly out the door (not 30 seconds later, after promising to do so…) when she says “The coat?”

There were other examples, but…I’m so brainless I can’t remember what they were. Oh, one of them was that I couldn’t actually print the report right when he wanted it, because I had done something stupid when I entered some transactions, so I had to fix that brainless mistake…

I did manage to make some pretty feathers though: 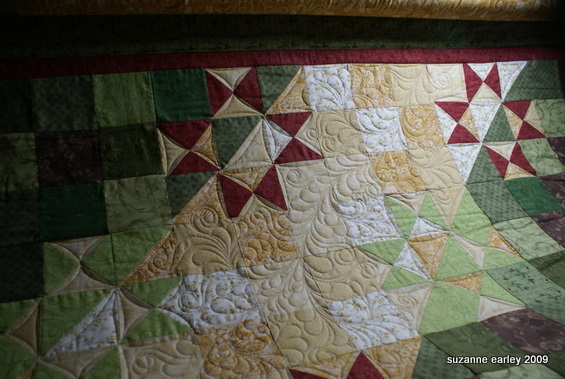 I also worked on moving some stuff out of my sewing room, so that Mark could begin some deconstruction.  After my second trip down the stairs, I suddenly thought to myself:

And then I made the boys carry the rest of the boxes downstairs.

I was going to sew or do some more straightening up and packing, but I got distracted by a big wad of yarn in my yarn drawer.  It was pretty nasty:  a whole bunch of yarn that had gotten all tangled together.  I dominated it, though…there may have been some cheating by way of cutting some of the yarn free…but still…I cleaned that mess up.  I also found a scarf that I had started knitting….more than 2 years ago.  The scarf was plenty long enough to wear, so I took a few minutes to go ahead and a bind it off.  Now, I’ll probably stick it back in the drawer, because a whole bunch of ends need to be sewn in, and that sounds like too much work.

I think I’ve finally managed to finish the things that Mark asked me to do…so I’d better get to bed before I hurt myself.