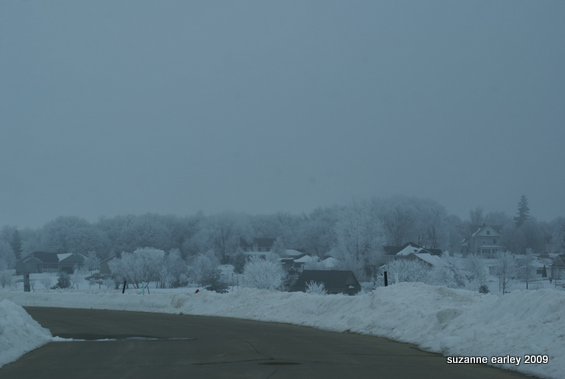 Our entire town looks like a flocked Christmas tree.

I took these photos at around 1 this afternoon, I didn’t think it was quite THIS gray out there, but… 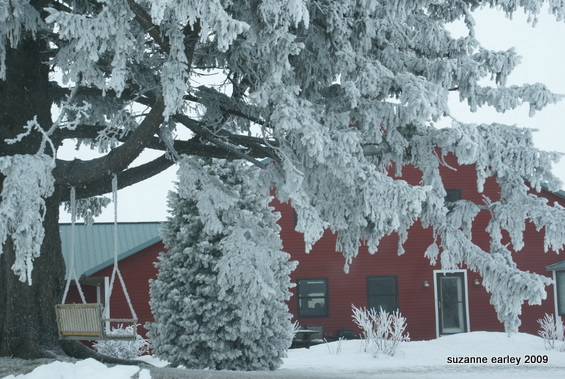 Yeah.  It’s been pretty gray around here.  I think we’ve had dense fog for…4 days now?  It was a lot better today, but still bad enough this morning that they delayed school by 2 hours.  It’s actually kinda creepy.  Like a fog from a horror story.  Like one of those mists that descends on a town and suddenly everyone in town turns into a zombie.

And I think we’re all going to turn into zombies because of a decided lack of sunlight.  Ugh.  I’ve been trying to avoide weather reports, because (a) I know that lots of people either have the same kind of crappy weather, or have it even worse and (b) it’s actually not been that bad around here lately.  But…I just had to share these crazy pictures.  Mark took the camera out yetserday and got some close-ups, I’ll have to try to steal borrow some of his pictures later.

The poor trees — they look so pretty, but some of the spindly ones around our property are looking pretty pathetic.  And it’s only going to get worse:  the forecast is for freezing rain the next few days.  So far the snow and frost collecting on the tree branches has been pretty floofy, but with freezing rain?  I’m afraid we’re going to start to see some tree damage here shortly.  Hopefully no power line damage, too, though. 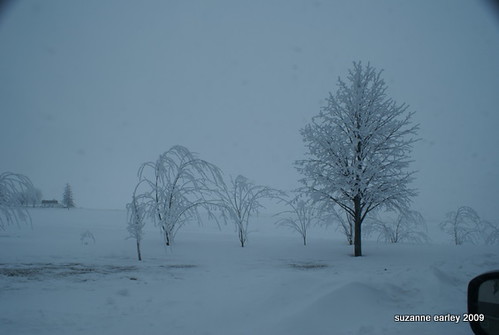 I puttered around my sewing room, so that I could maybe have something quilt-y or sewing related to share today, but…I kinda just stared at everything.  Dudes.  Did I mention that schlepping around fabric is really hard work?  Not that I’m complaining (much…), because it’s awesome to get so much fabric cleared out, but wow.  I’m really out of shape.  LOL

Last night I was in bed, lights out, and fast asleep by about 9:45.  Tonight, I think I’m going to beat that…