No pictures, because I forgot to take the camera.  Plus, we were at the far end fo the gym, andf rankly, the boys need haircuts so badly right now, their pictures would probably scare you.

Oh wait, here’s one that shows how scary they are: 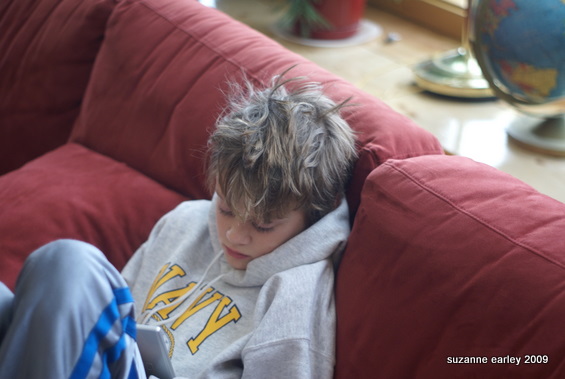 Anyway.  Holiday Concert.  The 5th grade band starts things off and they did pretty well.

After the 6th grade band is done, the Kindergartners come out and cute us all to death.

They sang Must be Santa (Dave and Deb, do you remember endless listens of Mitch Miller and the Gang?), with hand movements (too cute!), and then they did this really sweet medley of star poems and songs: star light, star bright, first star i see tonight…, a song I didn’t know, twinkle, twinkle, little star, and then they started saying “Good Night, Sleep Tight, Don’t Let the Bed Bugs bite” — and then they continued with one of the funniest things I’ve ever heard:

And if they do
Then take your shoe
And knock ‘em ‘til
They’re black and blue!

It was hilarious, especially because they were totally into it, acting it out.  I nearly died.

After they leave, the First through Third graders come out and each grade sings several songs.  After the 2nd graders were done, one of the little boys walked up to the edge of the stage and suddenly Mrs. Kent was turning him away and trying to sidestep:  the poor thing threw up right there on stage.  He’ll never forget this year’s concert, I’m sure.

It’s been kind of a long obnoxious day, so I should probably quit while I’m ahead.