I’ve mentioned before that my in-laws farm.  Mark helps with farming when he can, and he spends a lot of time out there during planting and of course:  harvest.  Harvest is running something like 3 weeks late, between the crops not being ready and a redonkulous number of rainy days (which made it impossible to do anything…)

I took my camera again, and so, I give you, a quick tour of the farm and my trip to the corn field.

Here’s the farm house.  Mark and his sister (hi Diane!) grew up here, and their Dad grew up here, too.  Their Mom grew up in a house that is now gone, but was just a mile(?) away.

For this picture, I was standing almost at the road looking west.  That’s my car by the garage. 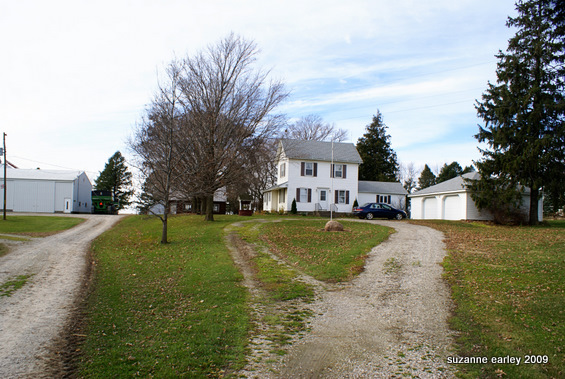 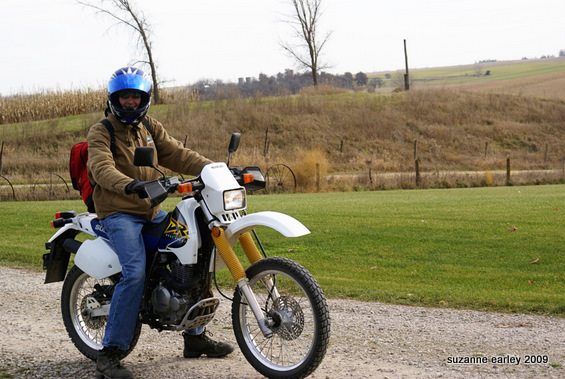 I should have gotten a picture of his back. He is using a Scooby backpack that the boys got from their Gramma Reed a number of years ago. He says he likes to give the people behind him a smile.

Here are a couple of shots of the farm from a different angle…this is looking east, almost directly back at the spot where I was standing for the picture above.  This red brick garage  was hidden by trees to the south of the house in that picture. 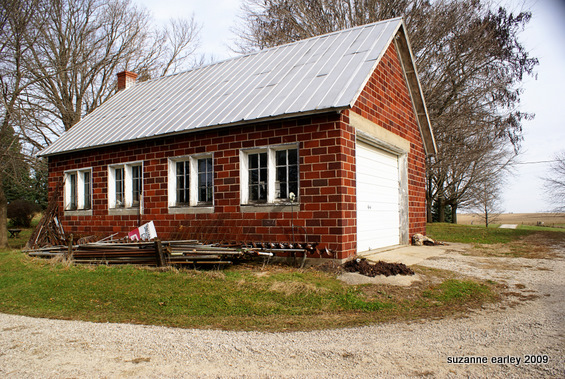 Looking north, you can see parts of the machine sheds. 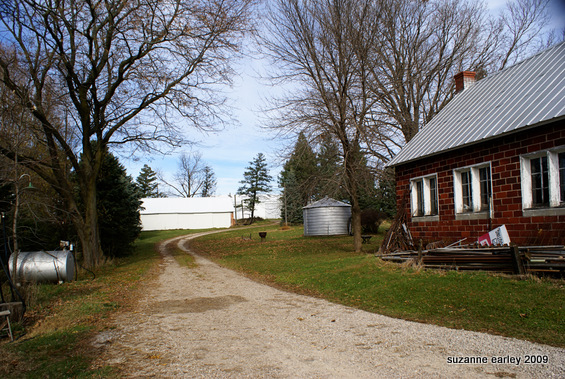 Looking south is the big shop.  I forgot to take pictures of the barns that are south and east of the shop.  There are also more buildings (they used to have hogs), but I didn’t get pictures of those this trip.

The tractors and wagons were waiting to be unloaded. 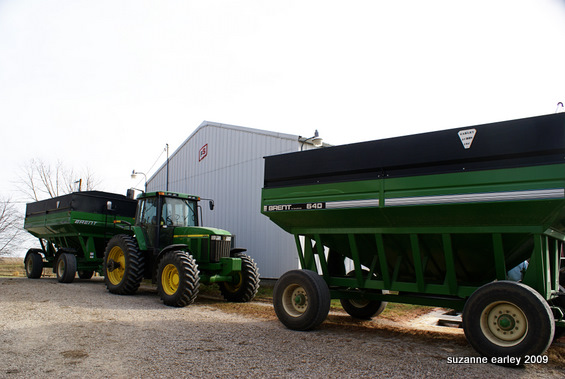 My father-in-law didn’t realize I was there until after I took several pictures of him examining the corn coming out of the wagon.   The corn was dumping into a pit and then being sucked up by an auger that was delivering it to a grain bin.  Or somewhere. 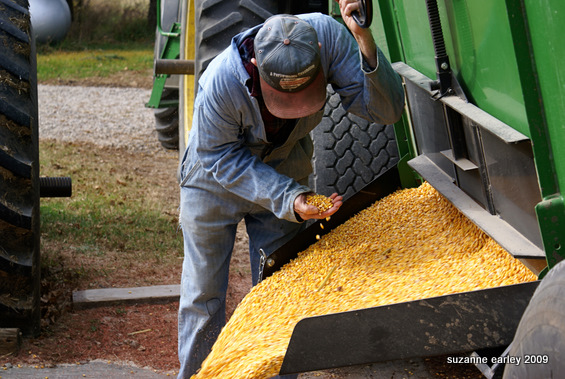 I could not get a good picture of these sweeties, the shop was really dark back in the corner where they have been living.  There were 7, but the littlest kitty didn’t make it.  Frankly, we were surprised that any of them made it as the mama cat is a skinny little thing.  She’s all black.  Apparently a grey striped cat has been spotted in the neighborhood.  I can’t remember how old they are, but they are ready to go to new homes, and we’re going to try to talk my mother-in-law into fixing Mama Cat, as well as the 1 or 2 kitties that will be staying… 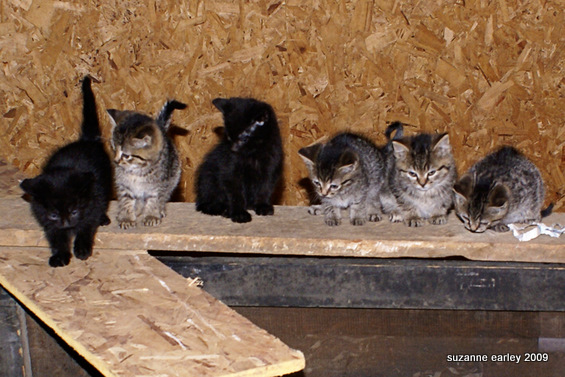 Once the wagon was empty, it was time for Mark and I to hop in the front tractor and head out to finish a field that was in progress.  He got the seat.  I got the armrest.  It was an extremely bouncy ride. 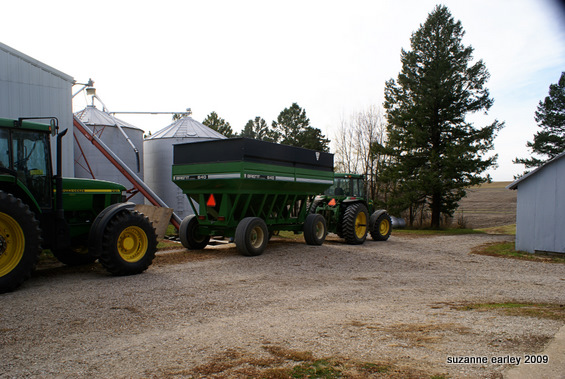 When we got to the field, we parked the tractor on the opposite side of the field from where the combine was waiting.  This meant that I had some quality time waiting for him to run and hop in the combine and return.  I played with taking pictures of myself in the rearview mirror (all of which were ridiculous and will not be shared…).  I also had to get a shot of the speed control because it makes me laugh.  The icons used EVERYWHERE on the tractors and combines and other equipment just cracks me up.  I especially like the Turtle and the Bunny, but there are pictures everywhere. 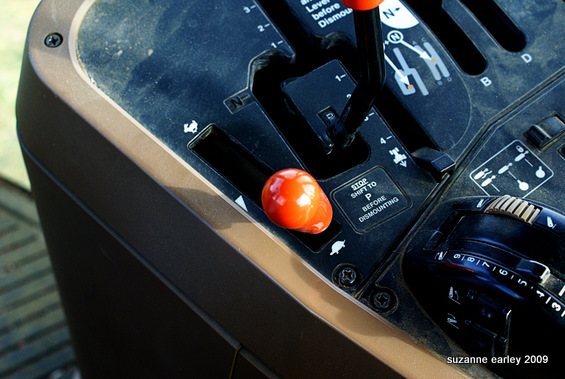 Finally, here comes the Big Beast.  This combine is new this year.  Well, new-to-us.  The last one was trouble from the get-go.   It actually caught on fire one day, when Will was out with Grandpa.  Yikes. 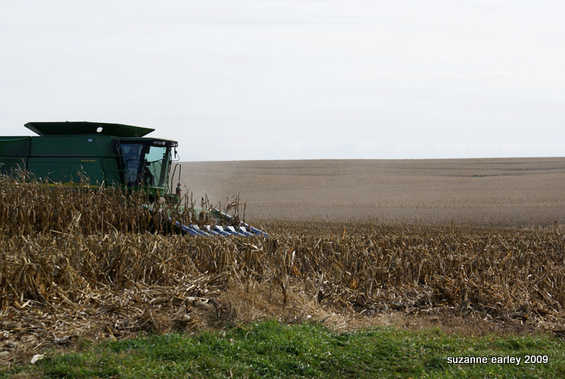 When you do nothing but go back and forth and back and forth and…you apparently have to come up with ways to amuse yourself.  One of the things Mark does is poke into the MIDDLE of a field, which requires you to carefully count the rows and make sure you are getting started in the right place. 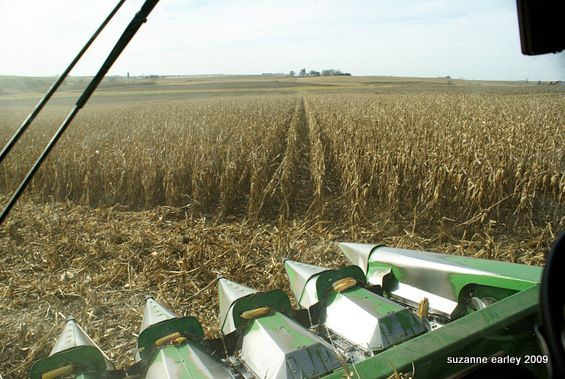 Once you’ve counted the rows, you can head in, lowering the corn head and making last minute adjustments to straighten yourself out. 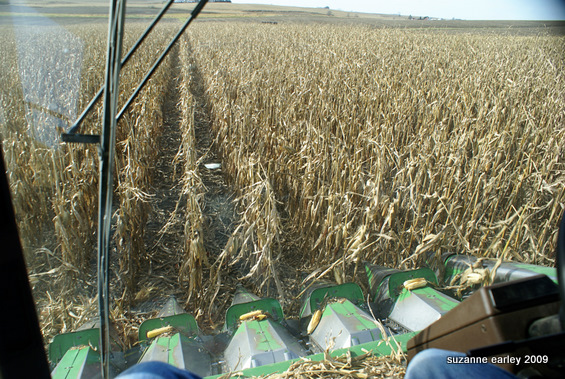 Once you are in place, the fun starts. 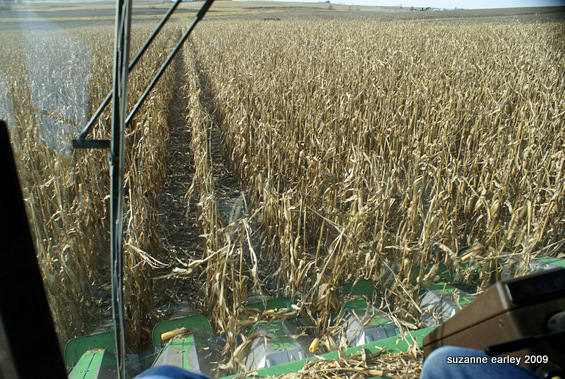 It’s a little bit mesmerizing to watch the stalks of corn get gobbled up and the ears of corn bounced around as the get sucked up by the gears and teeth and what-not. 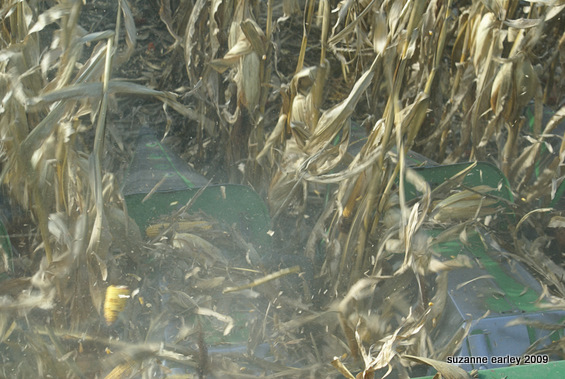 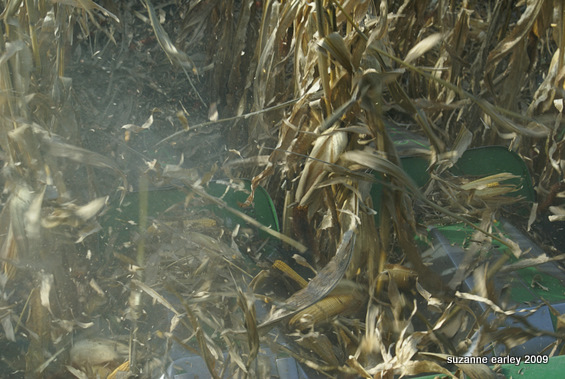 You have to keep a watch in the side mirrors, you can see a light patch at the top of the mirror in the picture below:  that’s a window into the tank on the combine.  You watch to see if you can see corn filling up in that window.  Mark can tell by the height of the corn in the window whether or not he can make another round before he unloads.  When it’s time to unload, he drives over to the wagon, extends the auger and starts dumping the corn out.  You can sort of see it here, where the corn is sort of a spiral as it gets towards the wagon, and when it starts to get closer to empty, but you can really see the “shape” of the auger in the stream of corn as it comes out the end.  Kinda crazy. 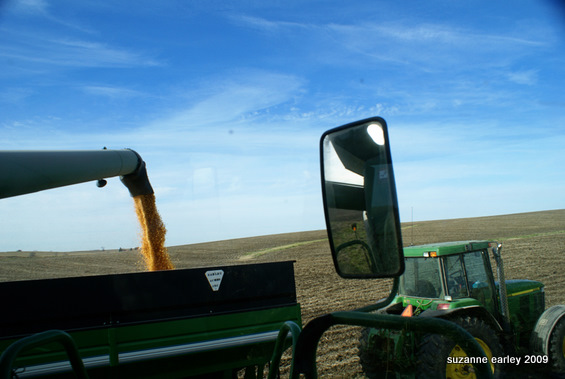 There wasn’t much to do in that field, maybe 45 minutes worth?  We got to drive the combine back to the farm, where it needed to be gassed up and then they were moving to a different location.  I’m not sure where Oreo was when we arrived, but she was waiting when we got back.  She leapt up into Mark’s arms right before this picture.  The kids call her Rocket Butt.  It’s apt. Oh, and you can see the backside of the Mama cat in this picture (her name is Midnight). 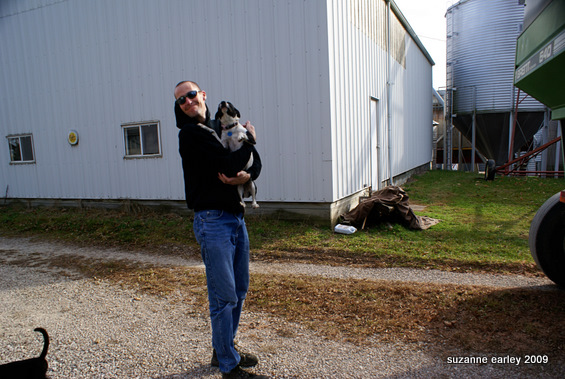 So.  That was my trip to the farm this year.  Thanks for coming along with me.  You can ask questions, but I’ll probably have to make up the answer.