You are here: Home / Blog / Quilting / The spirit was willing

But…the technology was weak last night.  I wanted to post, but my stupid server was down.

Sometimes technology can be a big old stupid-head.

I’m going to talk about my postcards for the MQR swap, so if you are participating and don’t want to see what you are getting until you get it, you should probably stop reading now.

I was going to spend yesterday working on zigzagging the edges of a bazillion postcards, but I got distracted by an idea for my Salt and Peper themed postcard exchange.  I’m officially late in getting them done: I swear that I don’t know what happened to September.

I thought I had a really great idea, but I could never figure out how I wanted to interpret that idea:  as some of you may remember, our town is going to be the home of a salt and pepper shaker museum.

The official name is the Traer Shaker Gallery.

A lady in town has been collecting salt and pepper shakers for YEARS, and the city and some private citizens raised the funds to buy the bulk of her collection, and put together a facility to display them.  We even made the CBS evening news a few years ago.

So…my idea was to do an old-fashioned tourism-type travel postcard thingy, and it just never gelled beyond that initial idea.

Apparently, though, Vicki’s comment about having people at the event on Saturday make black and white postcards must have stuck in my head, because when I was turning the page on my Penguin calendar (yes, I’m a few days late getting the calendars turned…) it dawned on me:  penguins are black and white!!!  And as my husband said, penguins are always cute. 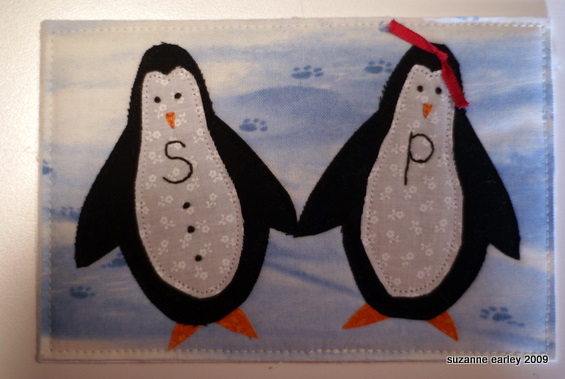 I have a Debbie Mumm book that has penguin themed quilts and ornaments, and I used one of the patterns from her book to make my penguin salt and pepper shakers.  I snagged some of my in-progress postcard blanks (that are intended for next weekend) for the backgrounds and with a little bit of embroidery:  voila!  I’m actually going to have these in the mail today!

And now, I think I need a pair of Penguin salt and pepper shakers.  And I wish they would look just like my postcards.