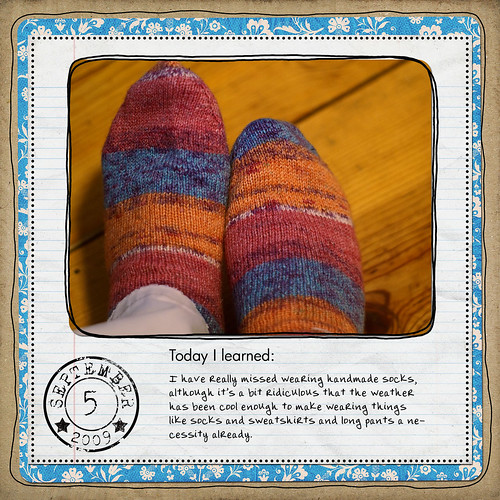 This one is a bit of a cheat.  I actually thought this several days ago, but that lesson was overtaken by something else.  Yesterday was really kind of a blur of painting, sinus headache, and the bag that I’m going to show in a second, so I decided to assign this lesson to yesterday…

The socks are new, and are awesome.  And were made by Mom.  Who is also awesome. 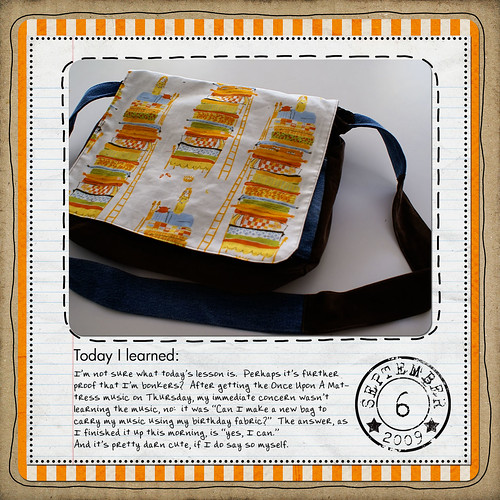 The Princess and the Pea fabric came from my Mom, who we’ve already established is awesome.  It’s been sitting, waiting to be used, and when I got my Once Upon A Mattress music on Thursday, I immediately went a little crazy (crazier…) and started wondering about making a new music bag.  The fabric is not really sturdy-bag-making-type-fabric, so I knew I needed to use it as more of an embellishment.  I was thinking about using something from the shop, but remembered this brown corduroy that I’ve had forever.  Like, it’s older than the boys, forever.

I ended up making things up on my own, sort of, after perusing some tutorials on some blogs and examining a messenger bag that I already own. 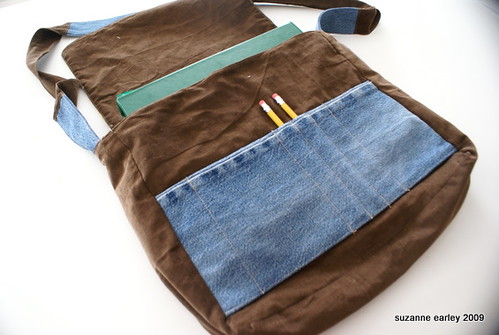 I’m pretty proud of myself for figuring it out.  Of course, now that I’ve made it, I have several ideas for improvements, and as soon as Mom saw it she made some remark about hoping she gets one.

Oh, and I still have most of 3 yards of that Princess and the Pea fabric.  What should I make next???