I forgot that my shop windows would be painted over the weekend in honor of homecoming: 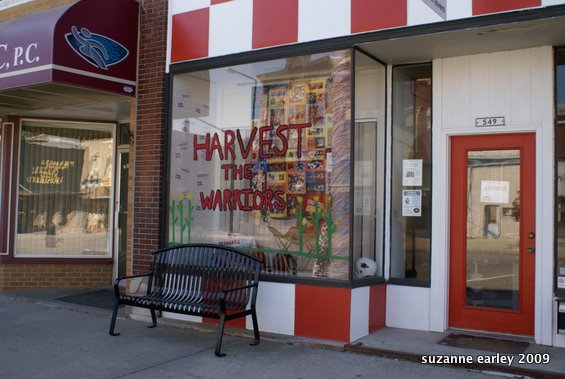 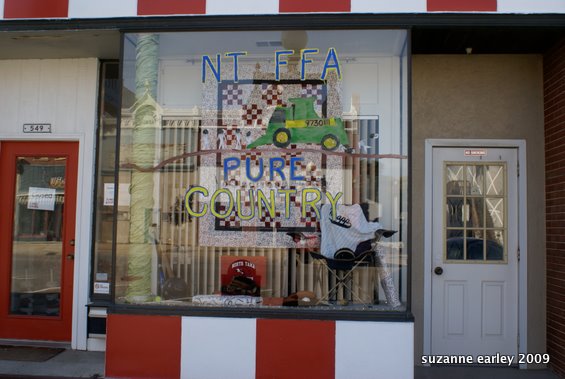 At first, I thought those white things in front of the combine were astronauts.  Then I realized that they were football players, and they were being sucked into the combine and spit out in pieces from the back end.

It reminded Mark of a joke about combines:

“How many lawyers does it take to grease a combine?”

Just one, and it works best if you feed him in feet first.

Today was supposed to be Duct Tape day.  Or something like that.  Lots of kids with random pieces of duct tape wrapped around themselves.  The boys had forgotten to tell me about the homecoming daily themes, I found this out when I went to volunteer this morning.

I didn’t work with either of the boys’ classes – instead I helped monitor one of the 4th grader classes –they were taking a reading comprehension test on the computer.  It’s a standardized test, they do it now and in the spring.  It’s adaptive, so as the kid gets things right, the questions get harder.  I was reading some of the questions over shoulders, and just kept shaking my head at the stuff asked of one little girl, who was doing well.  She had some doozies.  She asked her teacher if “onomatopoeia” was a real word.  The teacher couldn’t read it to her, or give her any hints, but did confirm that it was, in fact, a real word. And I had to have spell check help me spell it right.

Later, I saw her reading an excerpt from Romeo and Juliet (and she was tickled that it had a “sort of” bad word:  it started O God…).  She also had to find the definition for quintessential (it was used in a sentence, she had 4 choices.)

Phew.  Better her than me.  My old brain couldn’t handle some of that.