You are here: Home / Blog / Other / Handwork 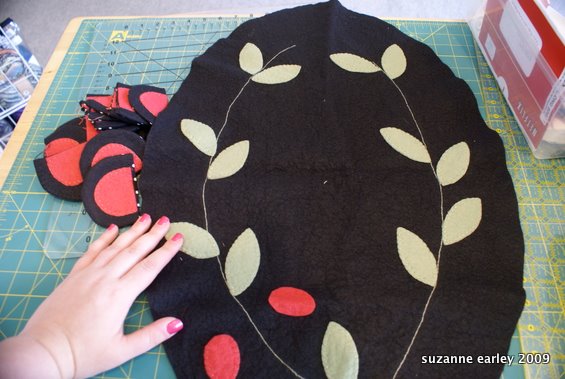 Did you know that it’s really hard to take a picture of your hand that doesn’t look dorky?  Yeah.  That’s why you are looking at a dorky picture of my hand posing with that wool rug.

So, first:  the handwork on the wool rug.  After finishing piecing the Radiant Star, I started pulling out some old (and I mean OLD) UFOs.  This particular project had been cut out, and I had handstitched ONE of those tongues (those half-circle thingies to the left).  I’ve now got all of those blanket-stitched plus a backing added.  I need to blanket-stitch around the edges of the tongues with black, finish appliquing the strawberries, add some flowers and some more stem stitch, and then assemble the whole thing..

It’s called a penny rug, but…I thought penny rugs had CIRCLES around the edges?  These are just HALF circles.  And are called tongues.  Maybe it’s a penny rug because a tongue rug sounds…wrong…

My name is Suzanne and I’m a recovering nailbiter.

I don’t know what happened this summer, but I stopped.

Well, I partly know what happened, but I can’t really explain why I’ve managed to keep them up to the point where those are my ACTUAL nails, with ACTUAL polish on them, those are not fake. And the other hand looks just as good.

(What happened was I thought I was going to be filming some stitching and having my hand in the video.  I went for a manicure and had tips and acrylics put on, but there was something wrong with ME, the acrylics and tips, or the application, because…I couldn’t keep the artificial nails on to save my soul.  And I did that TWICE.  Somehow, in the process, I completely lost the desire to actually pick at and chew on my nails.  Sorry, gross, I know.  I’m still working on my cuticles, but they are almost all completely healthy and whole, too.)

Now I need to decide which bad habit to tackle next.  I told Mark he couldn’t make suggestions.

If I could figure out how I managed to stop, I’d write it up as an  e-book and make one of those obnoxious websites to try to sell my secret to all of the other nailbiters in the world.