You are here: Home / Blog / Quilting / Radiant Star part 10, getting there…

My previous post, about my nasty looking ironing board cover, showed a pile of star pieces, and I wanted to follow up with an update of where I am at on this project.

Each star is made up of a bug-zillion individual pieces, that get put together into larger and larger units, until we reach the point where they assembled into 3 rows of 3 units each.  The construction is somewhat unusual, in that the of those 9 units, only the center is actually square:  the corners are almost square, but they have the diamonds on the 2 sides, and the units with the blue star points are…just odd.

In order to make everything fit together, the star point units are put together with 2 partial seams:  I drew some lines on this photo to show where the unit is, you can see how the large white triangle is floppy — only a short section of those seams gets sewn together at this stage. 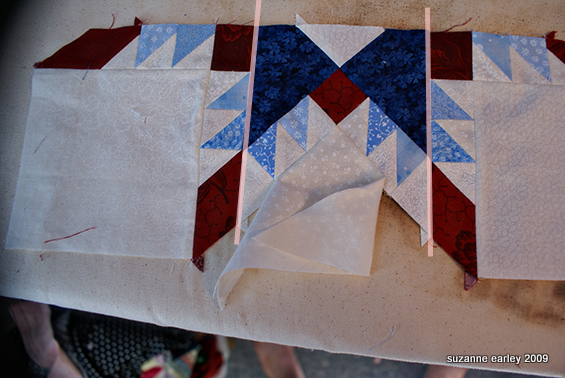 Next, I’ll be sewing outside units to center units, leaving those partial triangle seams until the very last.  Frankly, that’s one of the fiddliest parts of this whole thing, because the end is so close, yet, there are 8 of those seams to close up PER BLOCK, and they can’t be done quite as quickly as chain piecing is usually done.  Each seams has to be placed under the needle carefully, to make sure there isn’t any part of the rest of the star accidentally folded up underneath (I’ve had to fix several seams that had tucks in them…ugh…), and there’s back-stitching…and it’s just danged fiddly.  But so worth it in the end… 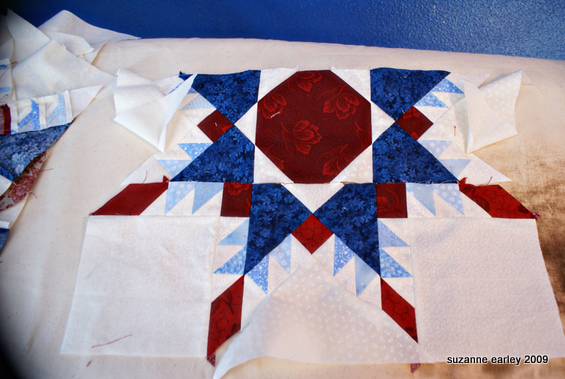 8 blocks worth of rows, just waiting for me to have the chance to pin them together and get moving.  Maybe tomorrow?  Maybe not. 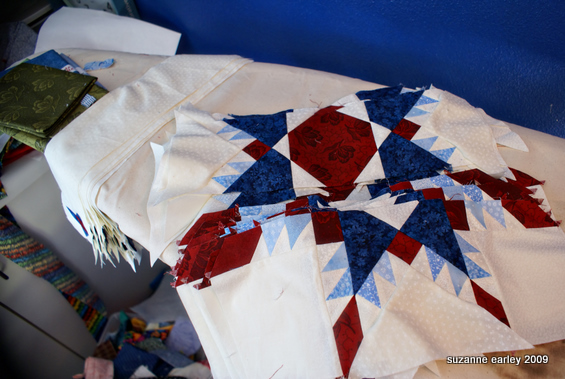 Are you sick of hearing about this project yet?  I’m not sick of doing it yet.  Closing up those 64 partial seams might throw me over the edge, though.

Past posts about the Radiant Star Project.