Our house gets redder and redder every weekend.  I love it more and more as time goes on.  We get pretty funny questions and comments from people when we see them around town.  One guy asked me if that was the actual color, or was that just the primer?  I think at least one person has asked if we are going to paint the whole thing.  Gee, no, we thought we’d just leave it half-painted…

A lot of people walk past our house, and we try to get some of the walkers to come help.  Some of the feign hearing problems.  A few have protested that they have bad shoulders. 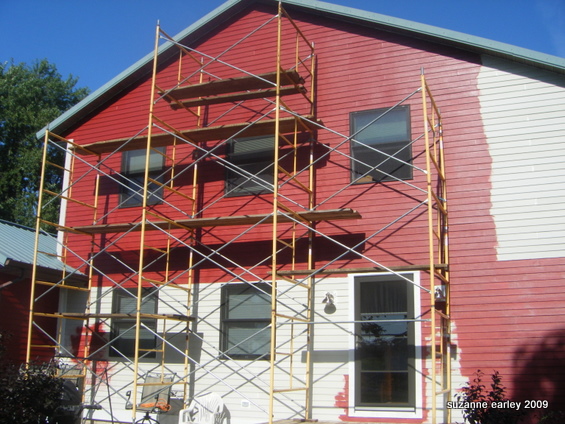 Speaking of bad shoulders, Mark had to paint left-handed most of the weekend as his right hand and shoulder and quite tired.  Yes, if it persists after the painting is done, I’ll insist that he actually get a doctor to look at it.

He didn’t quite get all of the 2nd coat on the upper section of the east side — he had to mow the grass!!  What’s with these summers??  We’ve had several in a row that have seen him mowing regularly well into August and September.  Usually, by now, the grass is dead and brown. 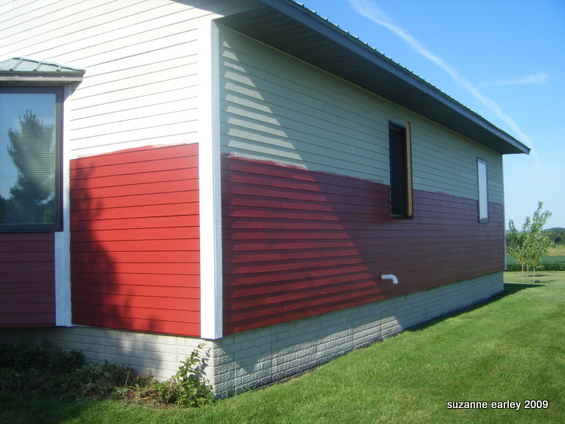 You can tell how high Suzanne can reach by these sections.  Except, apparently, she was one board shorter on the North than the east.  Oh wait — the ground must have dipped down there.  Yeah, that’s it… 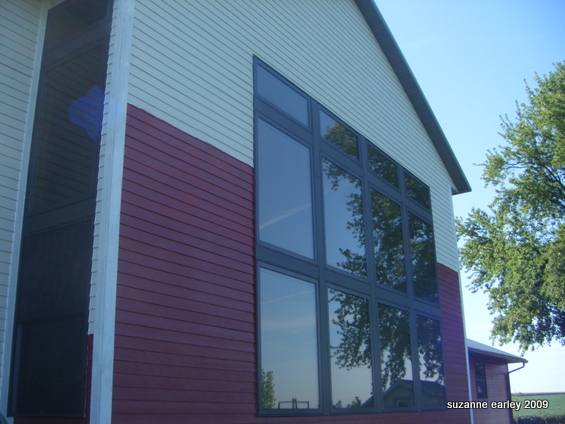 Mark used the tall ladder to extend up the sides of the west — I had painted as high as I could reach.  When he’s done on the east, he’ll move the scaffolding over so he can get the really high parts of this wall. 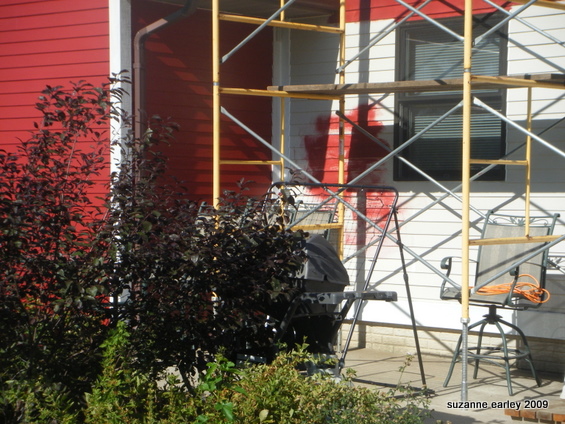 I’ll be glad to have Mark move the scaffolding so I can actually paint this spot.  I’ve used it to clean out my brush, and it looks like its the spot where we lined up the victim for a firing squad… 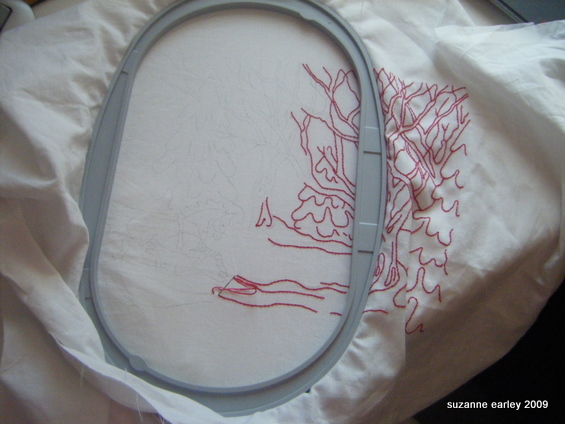 When I wasn’t painting or working on class materials, I was sucked into this project.  I decided I needed wanted to try some embroidery.  Most redwork doesn’t appeal to me, but this particular quilt called my name.  (Well, the pattern actually uses blackwork…but come one, you know me…it has to be red…)

Why yes, that is the embroidery hoop from my Bernina embroidery machine.

And even as I’m working on THIS project, I’m thinking about 3 projects ahead, “I could do this, and I could that, and…”  I don’t expect much will come of it…but I do have a pretty solid idea for using embroidery on a current quilt in process, so we’ll see how that turns out.

The boys are at school, I’m home alone, and have a million things I ought to be doing, so I’d better move along.  Have a great day!