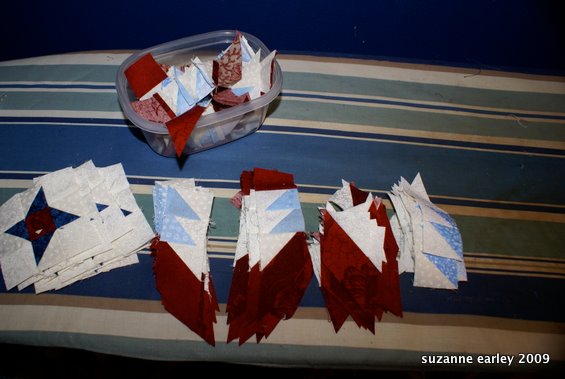 I don’t have any new full stars done yet, just lots of bits and pieces of stars.  Plus some small stars for the cornerstones.  So many of these subunits are directional:  the triangles face one way in one unit and the other way in another unit, that I find it easiest to do a bunch of one kind, then a bunch of another kind.  If I tried to do anything else, I’d be all turned around and confused.  OK, MORE turned around and confused.

I’ve also had a really supremely busy couple of days, and didn’t sew as much as I would have liked.

Saturday morning we had 2 little girls (ages 6 and 8) in the shop for a sewing lesson — it was a Christmas gift from their Grandma.  They came and learned a little bit about fabric and how things are made, and got to use the sewing machine.  They did some practice sewing with unthreaded needles on paper (we drew lines), and then we moved to fabric.  The eventual result was two pillowcases (each) using Vicki’s pillowcase instructions.  My Mom was helping the older girl, and she “got” the idea of guiding the fabric a little bit better than her sister did, so she actually did more of the guiding.  The younger one ran the foot pedal and her hands were sort of on the fabric, but I was actually guiding it, keeping it relatively straight.

I think they had a good time.  Mom and I did, but we were pretty well wiped out.

The rest of the last few days has been a blur of heat, rain, water in places it shouldn’t be (not lots, but enough to be obnoxious), baseball, quilting, etc.

Speaking of quilting, I’d better get back to the machine.