You are here: Home / Blog / Quilting / Other miscellaneous stuff

It was my birthday last week.  My Mom bought me fabric. She says the colors of it remind her of the first bedspread she ever bought me.  I wonder if she could find a picture to share?  I have vague recollections… 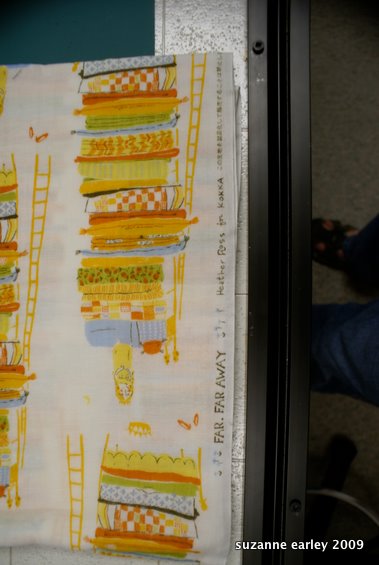 Sorry for making you tilt your head.  I thought I’d rotated it.  Oops.  It’s very interesting — it’s a cotton gauze.  I have 3 yards, and not sure what I’m going to do with it.  What we can’t figure out, though, is why there is no PEA under the pile of mattresses.

I am partial to the story of the Princess and the Pea, I was Lady Larkin in a high school production of “Once Upon a Mattress” — if you know the story, she’s the one that gets knocked up…

I’ve been talking to the new band director, and she thinks that the high school is going to do that show this fall for their production.  I’m probably going to accompany…yippee!

Speaking of the Princess and the Pea, did I ever show you my clock?  I bought it last summer before the shop opened, and it’s only just now gotten hung up: 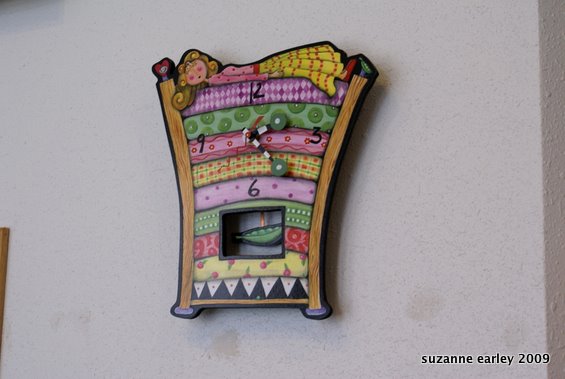 It DOES have a pea, at the bottom of the pile.

Last, but certainly not least:  a quilt top. 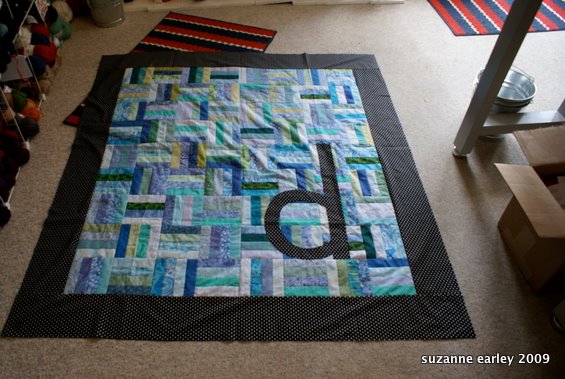 Several months ago, I organized a comfort quilt for an online friend.  At the time, I pulled out a stack of blues and greens to show as examples of what I would consider appropriate for the quilt we were making (it was a rail fence with white centers for the signature strip).  I thought maybe I’d have to make an actual quilt out of that stack of fabric, and before starting the Radiant Star project, I had actually started sewing strips together for this quilt.

I needed a break from the stars (can you imagine?) so last weekend I barreled on through putting the rail fence blocks together.  I debated about where to go next, and when I showed my Mom, she suggested it needed the letter “D” on it.  I’m making an elephant to match that will have a blue green body and the black and white polka dot for the ears.

The “D” stands for the name of the young man that this quilt will belong to.  Poor kid is probably going to be a year old before he gets a quilt from his Aunt Suzy.  Shameful.

To make this big applique letter, I laid the fusible web over top of the quilt, used my ruler to draw in the straight part of the latter, and then freehanded the circles to make the rest of it.  Actually, I drew it as a b since I was working in reverse.  I think it measures 24 inches tall!  I thought it needed to be big and bold.

Unfortunately, quilting needs to wait, as I have some stuff (like other quilts…and bookeeping…and packing…) to get done in the next (egads!) 3 days.

I’d better get moving, I guess.