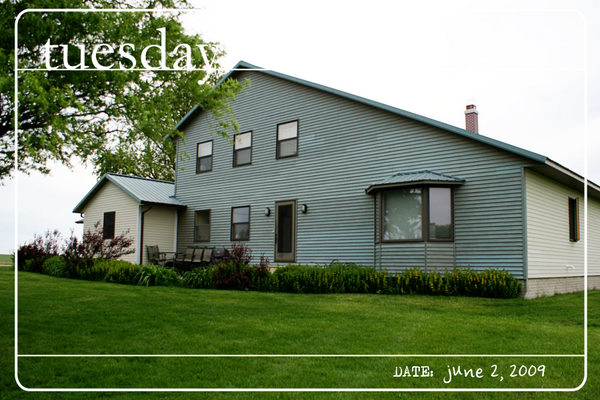 Since the house was built, the green siding has been multi-colored.  I’ve never been 100% sure, but I think there were two problems:  I think the builder didn’t order enough, and there was a dye lot issue, and I think that some of the siding faded oddly almost right away.

When we moved in, we knew it had hail damage, and that we’d have to reside eventually.  What we didn’t know was that there was water damage to the windows on the west side, so we also had to replace windows.  It’s a long story, but we ended up deciding to go ahead and replace ALL of the windows, whether they truly needed it or not.

This meant that we couldn’t afford to do the whole house at one time, so…this is year 3 of this project.  But the end is in sight!  This is the last section of the house to be finished, and then Mark can paint!

Soon the following will happen:

1.  The last of the green vinyl siding will come off

2.  The doors and windows will be replaced

3.  Something will be done about the front steps that have settled, exposing insulation and generally looking hideous

4.  The rest of the new cement board siding will be installed

5.  House will be painted (the cream color you see is just the factory primer color).