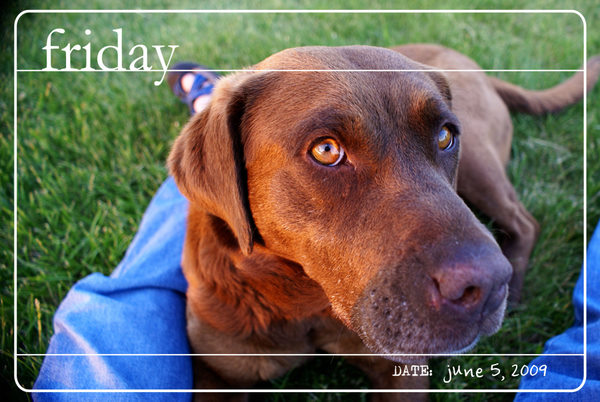 The boys were playing baseball and I was trying to take some pictures of them in action.  Unfortunately, not many of them turned out very well, but one of my furry helpers just about knocked me over trying to get close enough to me.   What a face.  You can’t really see it at this size, but the darkest spot in her eye is actually my reflection.

It was raining today.  What a mess.  And the concrete steps didn’t quite come out the way we’d hoped they would.   The two bottom layers were poured as one solid chunk.  The top layer was separate.  They ended up completely demolishing the top layer, and leaving most of the bottom two, but that’s OK, because that gives us room to build a deck over top of it.

We headed to Lowe’s to pick out some new light fixtures to go on eithr side of the door, and we looked at decking material.  It’s not going to be cheap, but I think it will all be worthwhile in the end.

I’ll be back tomorrow with a Radiant Star update, but first, here’s some of the results from the poll that a bunch of you kindly voted in a few days ago:

I’m glad to see a few of you voted for that last one.  Some days, that’s my answer for just about everything.