You are here: Home / Blog / Other / Crossed off the list

A Covered Lampshade!  Having said something on the ole blog, I figured I’d better follow through: 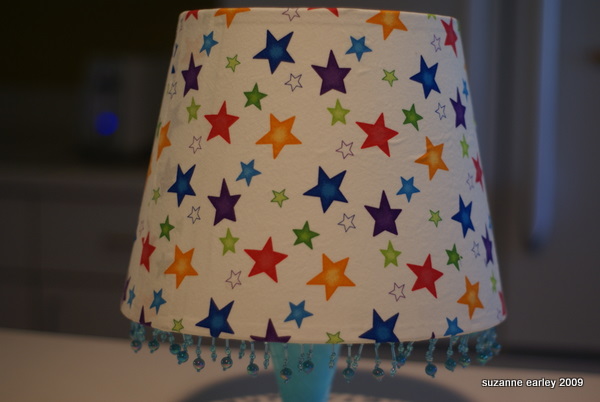 My sister-in-law had gotten 3 different beaded trims to try out, and I couldn’t remember which one Lucy and I had decided on, so after glueing on the fabric, I had Lucy come over to help wtih the beaded trim.

They are going to be spraypainting an older lampbase orange (I think it’s currently pink), and then Lucy will have a custom light fixture to match the quilt I made her.  I’d forgotten that I also made pillowcases for her.  That was back in October 2007, but I’m pretty sure it’s only been since Summer 2008 that I’ve been sitting on the lampshade.

After finishing Joe’s creature, which I suspect has been sitting around longer than the lampshade…Will demanded that I make something for him.  Luckily for me, the drawing he made me was pretty simple, and I was able to tackle it quite easily: 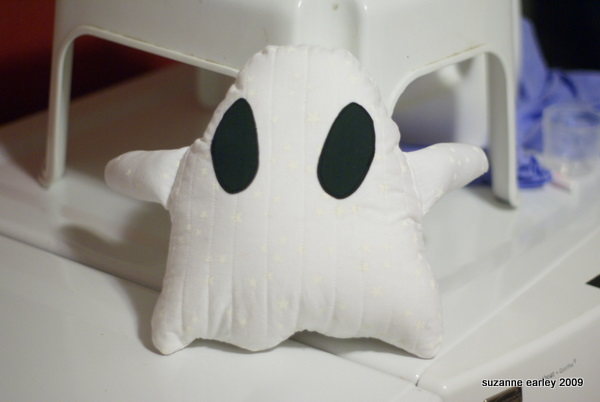 I quilted the body fabric before cutting it out just to give it some additional texture, since Mr. Ghost is quite plain.  Will did most of the stuffing, and I finished it up with some hand-sewing this afternoon.  I forgot to show it to him earlier, and was going to sneak it into his bed, but…he was still awake when I took it in.  His big grin was worth the effort.