You are here: Home / Blog / Photography / The return of the daily photo 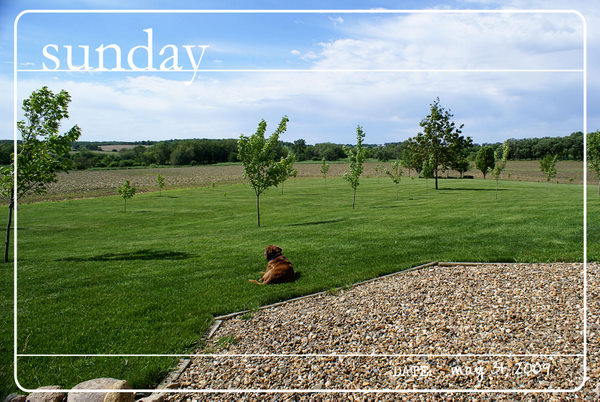 I don’t know what happened, I just quit taking pictures every day.  I don’t have really willing participants, except for maybe the dog(s), but I can only take so many pictures of the dogs.  I’ve been missing this, though, and had decided to start it back up tomorrow, the 1st of June.  But there I was, sitting out back, knitting in the wind, and the dogs were laying out in the grass and it was so pretty, I was compelled to take their picture.

Only, I had to go inside and get the camera first, and by the time I got back, Katie had moved on.  But Cocoa was willing to lay back down, and the trees and grass and sky hadn’t changed, so I went with it.

I did end up getting a couple of shots of her before we went to play Frisbee and Chicken*. 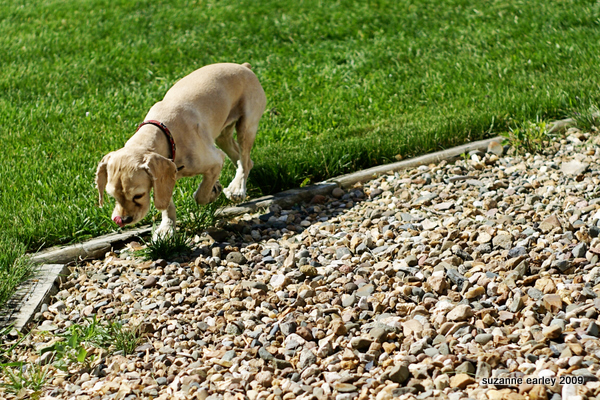 She was the victim of a recent haircut.  She hates haircuts.  But after a haircut and a bath, she’s like velvet, which means she gets more cuddles, but I don’t think she has that much of a sense of the future.

I’m at a bit of a loss for a sewing project at the moment.  Everything’s either waiting for binding, waiting for quilting, not a stage where I can easily sit down and just sew…sounds like time to start something new, right?  Maybe I’ll just go knit. Or do one of the other many things I ought to do, like clean.  I vacuumed for awhile, and wanted to mop the kitchen floor.  OK, I didn’t WANT to mop, I just thought maybe it was probably time.  Only, I can’t find the fancy-shmancy micro-fiber thingy I stick on the end of the mop to clean my wood floor.  I can’t really fathom where it would have gone, so…the urge has now passed, and I probably won’t get back to wanting to mop again for ages…

*To Play Chicken, you must have a really obnoxious rubber-chicken toy that squeaks when you squeeze or shake it.  You then throw the obnoxious rubber chicken as hard as you can, and Cocoa will chase after it.  We are just thrilled that she actually wants to PLAY with something.  Whilst she’s distracted, chasing the Chicken, Katie chases the Frisbee.  If Cocoa notices, and can get to the Frisbee first, though, all bets are off.  Poor Katie doesn’t stand a chance…