You are here: Home / Blog / Quilting / Sweet, the pattern

Here’s where I started:

I started playing with it in EQ6: 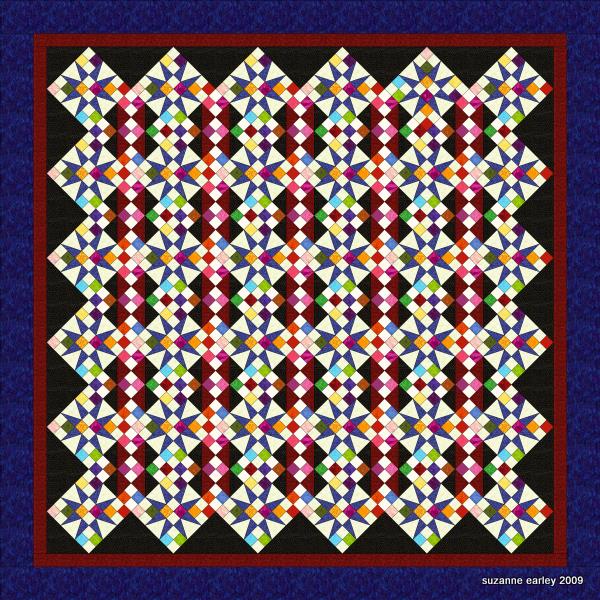 That’s basically the quilt as made by Bonnie,  though I had already decided that whatever I made it was going to bigger, and I think I oriented the chains a little differently.

I wasn’t really crazy about the black and red triangles, though, and when I took a tour through my stash, I wasn’t really sure what I’d use for those.

So I got rid of them.  And thought I’d see what it would look like with half-chain blocks around the edges: 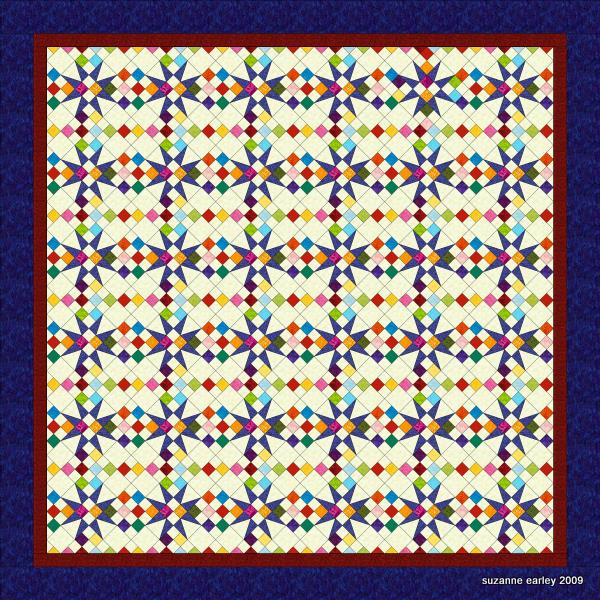 And then I took another tour through my stash, and couldn’t decide what to use for the blue star points.

Plus, I had a conversation with myself about the fact that it was starting to look like the color palette for every other stinking quilt I’ve made, and maybe I should try branching out from RED WHITE AND BLUE, and try something different.

I’m not sure how I flashed on brown and pink, but it wasn’t much work to turn the design above into the design below: 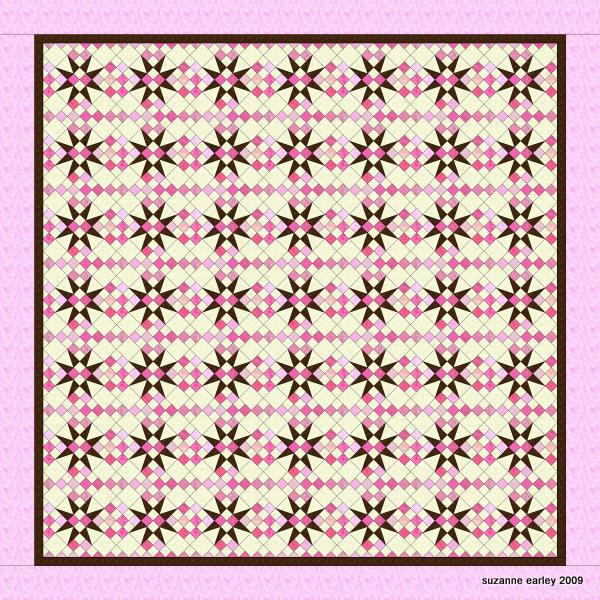 The blocks finish at 9 inches, there are two:  a chain block and the star block which is a modified “54-40 or Fight”.  Oh, plus the half and quarter blocks around the edges.  I forgot to do snapshots of those. 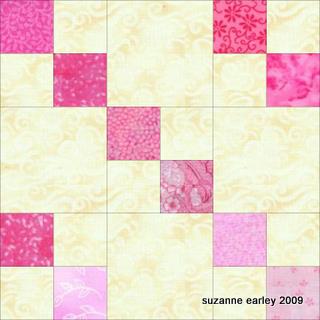 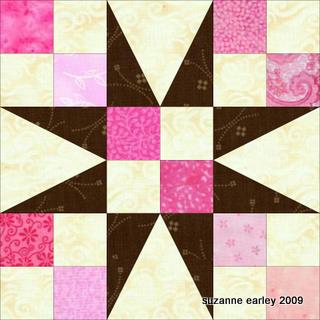 I did use my Tri-Recs rulers to cut the units for the star points, I need to order some of those for the shop.

Bonnie doens’t give any yardage information on her pattern, hers was completely out of her stash.

According to EQ6, my pink and brown quilt as above, excluding the borders would use:

My experience with previous version of  EQ was that it vastly overestimated the yardage needed.  I haven’t tried to figure out if this is close or not to what I would estimate if I sat and did the math myself.  For my quilt, I just started cutting and cutting and cutting, and then cut some more when I ran out, so I don’t really know what I used.  I would guess that’s pretty close.

Because my project was based on hers, I don’t feel it’s appropriate for me to do much more than tell you what I changed, and give you some notes about how I accomplished my end result.  She has some pretty good pictures and instructions about how to make that star block using the Tri-Recs rulers.  My chain blocks are just like her Jacob’s ladder block, but with plain squares instead of the HSTs.

And to be honest:  mine’s not done.  I don’t know that I’m going to do the borders as depicted above, and I bet you wouldn’t be surprised to learn that I’ve got some ideas for using some appliqued text…

I hope you are having a great day:  the weather is beautiful (if windy) and I’m getting my haircut in 45 minutes (hallelujah).  Tonight’s the meeting for prospective band members and their parents.  I’m finding it hard to believe we are 5 school days away from finishing 4th grade.  I’m pretty sure they were in Kindergarten just yesterday.