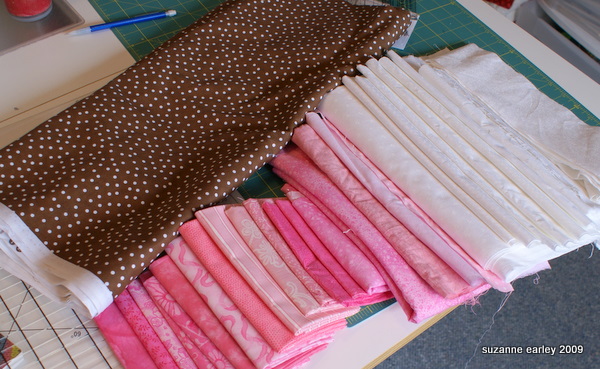 Way back on April 29th, I showed you this pile of fabric.    I don’t think it will surprise anyone to see that I’ve already turned that pile into a quilt top:

The funny thing about Internet time is that while it might seem to YOU that I got that done really quickly, to ME it seems like I’ve been making pink and white four-patches for infinity.  Several times I almost decided to just call it a day and make it smaller, but then I looked at the pile of already cut pieces and decided to keep going.  And going, and going.

So even though you wouldn’t know from my blog that I’ve been sewing, I have been sewing a lot.  I just don’t seem to be very good at making the 13th post about the same project as interesting as the 1st post, like some people are…

Now, it needs to marinate for a few days, before I decide how to finish it.

(For reference, there are 49 stars and 36 alternating star blocks, plus the 28 partial blocks around the edges, for a total of 459 four-patches.  I haven’t measured it, but mathematically it should be about 90 by 90 right now).

(And before you ask, the other quilts are hanging from the balcony after being washed.  We had fleas.  Well, we have a dog who had fleas who slept with us, and…yeah.  Aren’t you glad I told you that?  The quilt on the left is a Minnesota Hot Dish, made about 3 or 4 years ago, the one on the right is…sawtooth stars, but the pattern had a fancier name.  I made it…5 or 6 years ago?  Before this house…)