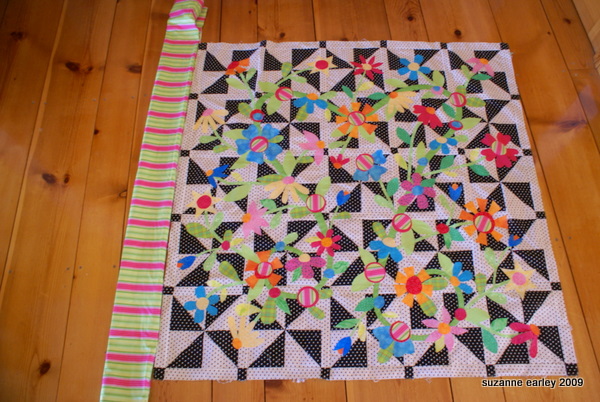 This doesn’t really look any different than prior pictures, however you can tell the flowers have been fused in place.

(Um, you can tell, because it’s no longer sitting on the carpet in the doorway, but has been moved without all of the flowers falling off…)

The pictures aren’t doing it justice.  At least, I don’t think they are.  I think it looks better in person, but then I worry that just because *I* think so, doesn’t mean it’s actually so.

The striped fabric is auditioning for a frame.  I don’t think it’s going to get the part, though.  I’m not really sure what it needs.  Maybe a frame of the black polka dot fabric?  Too bad I don’t have any more of that.

The fusing was done on the floor, righ ton top of the carpet.  Don’t tell Mark.

I then took it to my ironing board to finish the job.  Several of the pink petals ddn’t want to fuse no matter what.  I kept hitting them with the iron and they kept flopping around, held in place only by the flower center on top of them.

Then I realized that when I cut those petals out I apparently grabbed a hunk of the fabric that didn’t actually have fusible on them.  Duh.

In the last few days I’ve also had an epiphany about how to finish the blue and white Irish Chain I pieced awhile back.  In that previous post I talk about having delusions of applique — I could picture appliqueing something, maybe with some words… 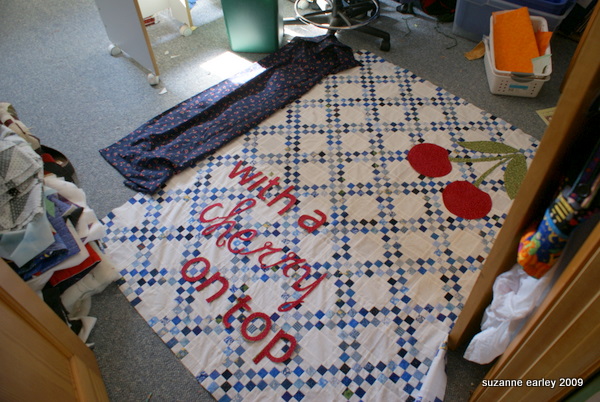 You can’t tell from this picture, but that blue fabric over on the left has cherries on it.

The words are just sitting there, because I’m still debating about placement and color. 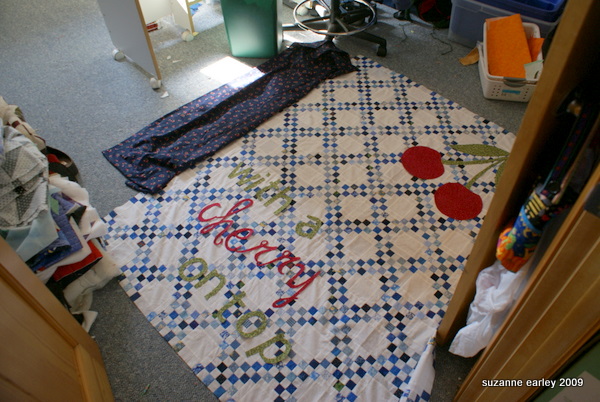 I liek the idea of having only the word CHERRY in red, but when I put the other words in green, they disappear.  I may need to try a darker green?  The applique stitching will help, but I still worry it won’t stand out enough.

Anyway, that’s what I’ve been up to.

Oh, that and dealing with freaking Russian pervert spammers who sent over 1000 private messages to members of MQResource yesterday.  Good times.

Oh, and a cold.  That meant I didn’t sleep a wink last night.  It’s going to be a long stinking day.