You are here: Home / Blog / Other / Minkee backed strap cover 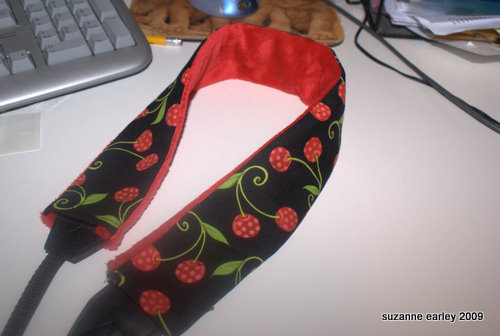 I’ve only ever used Minkee for the backs of quilts, never really sewn with it.

I think I made this one a little too wide, and I think I would like it better if I made it such that the cotton side was a bit bigger than the Minkee side, so that  the Minkee didn’t roll to the other side.

I wondered how long it would take my sister to put in her order.  I was actually looking at some black and white stripe fabric I have — that would probably look pretty cool with the red Minkee (the only color of Minkee I hvae at the moment…) and not be too girly…

It’s unintentional, but a bit funny that both this one and the previous one are fruit related fabric.  I was going to say cherries and strawberries are all I have, but I think I’m wrong — I have a stack of fat quarters from that Sock monkey colleciton — I think there are some bananas in that stack…

I took a 2 hour nap this afternoon, which of course means that I’m wide awake now.I sholud probablygo to bed, but I think I’ll go sew some more.  Though, I’m done making camera strap covers for tonight.